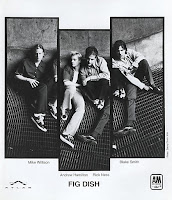 I haven't shown any love for Fig Dish on here since about 2010, so apologies if I'm overdue.  What I'm sharing was relatively available a few years ago, but the original website hosting it appears to be defunct.  For those in the dark regarding who I'm even referring to, Fig Dish were an often excellent aggro pop-rock outfit from Chicago who recorded two albums for A&M in the mid '90s - That's What Love Songs Often Do (1995) and When Shove Goes Back to Push (1997).  Both disks were foisted onto a rather indifferent public, and commercially they went thud.  In fact, I don't think I ever happened across a CD of Love Songs that didn't have a promo stamp on the cover.  Pity all those uninformed kids who clung to their copies of Mellon Collie... and precious little else.  I saved the notes from the site that hosted Onanism, and they're below.  This is essentially an oversized batch of demos for material slated for Fig Dish's follow-up to Shove that never came to fruition.  Some phenomenal cuts too - "Ragged Ones," "Science Goes Public," "Senior Circuit," etc..

After two albums, with a combined sales of 16,000 copies, Chicago rockers Fig Dish severed their relationship with A&M Records in 1998. The band, consisting of Blake Smith (vocals/guitar), Rick Ness (vocals/guitar), Mike Willison (bass), and Bill Swarz (drums), went back into the studio to record demos to shop to other labels. RollingStone.com wrote a feature about Fig Dish’s departure and their subsequent record in which Smith said Fig Dish had no intention of breaking up and had recorded a double album worth of new material. Less than a year later Smith and Willison had started a new project, Caviar, while Ness started his own solo band, bringing Swarz along with him. So whatever became of those 2 CDs worth of material Fig Dish recorded?

After being locked away in the Fig Dish vault for nearly 10 years, we’re happy to unleash the cracken and offer you the 19 track demo that Fig Dish recorded and used in an attempt to find a new label. For fun, we’ve tossed in 2 songs that were on the hard-to-find “Quiet Storm King” CD-single released in 1995, “Eyesore” and “Spit the Part."

Do you have their version of Cheap Trick's "Downed" that was also on the Quiet Storm King EP (at least it's on mine).

Happy to send it to you if not.

I probably have the CD in a box somewhere. Will try to track it down.

They have some pretty good songs, and they're probably as good a band as better known contemporaries like The Lemonheads or Buffalo Tom, but i think the secret to Fig Dish's lack of commercial success is pretty simple, i.e. a clear cut case of "your name is your destiny". i've long felt that a good test for a band name is whether or not you would feel cool wearing it on a t-shirt. "The Lemonheads", for instance, is a solid band name because it's cute, hip and retro. If i cared for their music, i'd wear the shirt. Buffalo Tom is a good name because it's got a rootsy, authentic feel and is oblique enough to make me curious why the band chose it. Again, if i were into the music, i'd wear the shirt. "Fig Dish" on the other hand, is just a WTF-sort-of name. Really guys, WHY? Were "Fondue Pot" and "Cheese Board" already taken? Instead of doing the REM thing were you flip through the dictionary and select a random entry, did they just open mom's china cabinet and point? Regardless, as a 90's teenager, i can't imagine any circumstances under which i would have hung out at the mall or the skate park wearing a t-shirt emblazoned with "Fig Dish" *even though i liked the band* (i once saw them open for Green Day in the early 90's - or at least i think it was Green Day). Now obviously, everyone knows you can't judge a band by it's name, but names still work on a more subliminal and gut level. Right off the bat, people are going to be less interested in a band with a name like "Fig Dish" than a band called "The Lemonheads", "Buffalo Tom", or "Green Day". Which is a shame, i suppose. But hey, at least they now have the obscurity factor to lend them some coolness.

Sorry this post isnt about “fig dish” who are excellent but i stumbled across the fact that you posted(in the past) the “pollen” records. Is there any chance you could reup them for me? I lost a bulk of my disc collection in a move down the eastcoast and i cant find any of my pre “chip” pollen records. Thank you so much!

This is me hoping for re-ups of previously-posted Fig Dish material... :)

Loved this band. They were incredible live!

Agreed with the live premise. I was able to catch them 4 times in the mid/late 90's and a reunion show at Schubas in 2007.(Jeez, has that really been 12 years already) They were severely underrated(along with triplefastaction) but I listened to That's what love songs often do today for the first time in quite a while and it brought back a lot of memories. Loved this band, still do.

Re-up please? Thank you for all you do