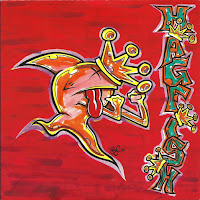 For a good swath of the '90s Hagfish were the gift that kept on giving.  Four monkey-suited Dallas denizens dropped three, rock 'em sock 'em albums all bearing a modus operandi that registered somewhere between the Dickies and Descendents (with plenty more caffeine than the latter) and a buzzbomb guitar frenzy that would have run circles around Johnny Ramone.  The band's unremittingly vigorous cavalcade of power chords and melody made an utterly visceral impression on me, and their titillating, in-your-face themes of sexuality ensured their was nary a dull moment to be had.

In between the full lengths came a pair of independently released 7" eps, which I'm making available right at this very spot.  The first (to your slightly above right) pre-dated their major label stint on London Records, and contained early takes of soon-to-be signature tunes "Minit Made" and "Stamp (Eat it While I Work).  I believe all four songs overlapped with debut LP Buick Men, and may in fact be identical versions.  I never compared them back to back. 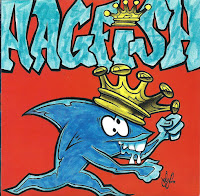 The second 45 (bearing a strikingly like-minded cover motif) showcased some exclusive songs to the record.  And some pretty exciting ones at that including the uber vindictive "Shiner."  Hagfish had something immensely special on their hands...but success was not in the cards, and they parted ways around 2001.  Of the four members from the final lineup, guitarist Zach Blair made the most of his post-Hag tenure, hooking up with Rise Against a little later in the '00s.  A full bio can be accessed on Wikipedia.