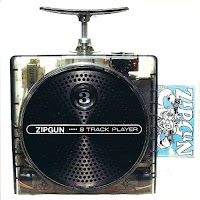 I can't believe I've neglected Zipgun this whole time, considering I've been listening to them waaaaay longer than I've been doing this site.  Anyway, even if they've evaded you're proverbial radar altogether you can be forgiven.  Every sweepstakes garners only a handful of winners, and this Seattle foursome finished well behind in the Emerald City's grunge/punk contest.  Not that they were deliberately pursuing the grunge angle (so far as I could tell) but they were plenty vigorous for the punk circuit.  And damn competent at it too, falling squarely in league with such contemporaries as Swallow, the Supersuckers, The Derelicts (of which Zip guitarist Neil Rogers was a member of) and even beloved Denver cousins the Fluid.  Zipgun's lifespan was accordingly brief as their catalog, which consisted of two full lengths and a clutch of singles.

8 Track Player hit the racks in 1992.  It's subterranean scumfuck quality was evident, but not overpowering.  Z'gun were undeniably groomed on Motorhead and Raw Power and not the latest NOFX offering.  Like the aforementioned acts they were akin to, Zipgun were upping the ante to something meatier and more potent than what proto-Warped Tour skate punks were getting off on.  Suggested (first) listening: "Together Dumb," "The End," and "Cool in the Cell." 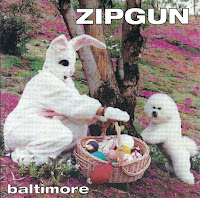 Arriving just one year later, Baltimore is doubly more assertive, tighter and balls-out rockin' than the already blistering debut I just got telling you about.  I'm tempted to dole out some recommended selections, but this sucker is an all meat, no gristle affair.  Relentless in it's breakneck pace and muscular aptitude, you could argue that Baltimore served as a precursor to just around the bend speed punks like Zeke and REO Speedealer.  As for the album sleeve, I'm really not sure what the hell Zipgun had in mind, but it sorta works.  More info available on Wikipedia.

Once again I am left to wonder how I came to have these albums already if I didn't get them from you.

Baltimore was big at my college station, you'd hope because of all the things you said about it, but more likely because so many of the kids came from Baltimore.