Are these words distraction to the words you want to hear? 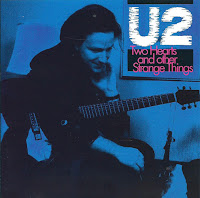 What would possess someone to gather up every single take and remix of U2's "Two Hearts Beat As One" and have it pressed to CD risking the repercussions a bootleg such as this might entail?  Not sure, but despite it's inherent redundancy I'm happy Two Hearts and Other Strange Things exists.  It's certainly not the most iconic song off of War, and for that matter it strikes me as a tad underwritten on certain listens.  Nonetheless, it's a perfect snapshot of Bono & Co's development since Boy and October, if not lyrically, sonically.  "Two Hearts..." delights with an alluring, bittersweet chorus hook and the chiming, jagged fretwork is quintessential Edge.  There's a semblance of restraint here that would expand exponentially on future U2 records, yet it doesn't cut the line completely with the band's earlier aesthetic.  In short, a downright respectable balance.

The thirteen variations of "Two Hearts" is followed up by a thirty minute extraction from a late '87 acoustic jam session with Bono and the Edge, fleshing out two new songs we never saw the finished versions of, plus previews of "Heartland" and "Van Diemen's Land" songs that would soon crop up on Rattle and Hum.