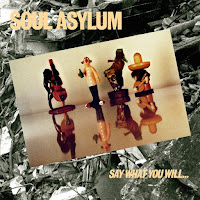 The above lyric swiped from an acoustic ballad on Soul Asylum's Made to be Broken LP, incorporated "1993" as a simple rhyming device, yet it proved to be ironically prophetic as that happened to be the year Dave Pirner, Karl Mueller, and Dan Murphy (the band's core triumvirate) broke bad and nationwide with "Runaway Train."  Situated in this era were two of their contemporaries that hurtled on a parallel trajectory as well, Urge Overkill and the Meat Puppets.  All three boasted fairly prestigious indie rock pedigrees, and relatively rich back catalogs...that their newfound mainstream converts were sadly content to ignore.  Indeed, there was life before Grave Dancers Union, and a spirited and often uneven one at that, but Soul Asylum's finer mid '80s volleys sometimes bordered on astonishing.  Omnivore has reissued their first two Twin/Tone Records platters, Say What You Will...Everything Can Happen and 1986's aforementioned ...Broken with a bevy of bonus material and a crisp remastering job worth the price of admission alone.

Any "Asylum seeker" (yep, I couldn't help myself) who caught wind of the band's initial gale force rush prior to signing to A&M and later Sony, was likely aware of two key things - they were punk rockers at heart, and they initially christened themselves as Loud Fast Rules.  That rip roaring moniker would probably strike most eyes and ears as a veritable mission statement, yet while the band did create fearsome hardcore blasts (revel in the gloriously thrashy attack of "Draggin' Me Down") the famed Minneapolis quartet had a penchant for juxtaposing those youthful outbursts with elements of jazz, rock, and in one instance even doo-wop.  From the get go, Pirner and crew were wildly diverse, even though they came up in a time when it was perfectly ok to stick to the aesthetic of their initial namesake.  Produced by already-known-quantity Bob Mould, Say What You Will commenced with a rather angular, Husker Du indebted track "Long Day, " accented by Murphy's distorted, ringing leads, that wouldn't have sounded out of place on Zen Arcade or for that matter any given Mission of Burma record.  It remains one of their most impressive feats to this day, and there's even more gold to be mined on SWYW, including the sax-laden spiel, "Stranger" and "Black and Blue" loosely challenging early Replacements.  Six additional rambunctious and mostly rewarding tracks were added to first CD incarnation of the album in the late '80s, all of which are reprised here.  The Omnivore edition tacks on about an EP's worth of unreleased Lost Fast Rules demos (bear in mind, not necessarily punk) and a rather sardonic cover of "Bad Moon Rising" credited to Proud Crass Fools.  Consider yourselves warned. 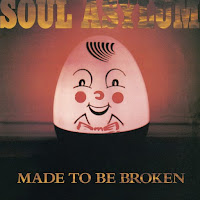 Fast forward to the Iran-Contra era for the band's tremendo leap forward, Made to be Broken.  Despite it's status as Soul Asylum's second full length, Broken has a tendency to sound even more organic than Say What..., albeit logically more advanced to boot.  It's yet another astute Bob Mould production, and it launches with the sublime visceral rush of "Tied to the Tracks," which might as well have graced Flip Your Wig.  Indeed, the very fact that one can attach the term 'visceral' to the band at this phase in their tenure shows how remarkably they progressed from just a couple years earlier.  The melodies alone are admirably discernible on "Can't Go Back" and "Long Way Home," with both selections being indicative of Soul Asylum's almost fully settled signature sound.  "Whoa," "Lone Rider," and "New Feelings" were ample evidence they still had plenty of high strung slammers to coax out of their systems, plus they operated just fine, thanks within the confines of relatively mellower tempos on "Ain't That Tough" and the previously quoted "Never Really Been." Roughly half of Broken's fifteen bonus cuts are culled from the band's cassette-only outtakes curio, Time's Incinerator.  The remainder are entirely heretofore unreleased numbers, usually amounting to fleeting afterthoughts and/or abandoned ideas that only the most ardent of Asylum obsessives will develop a sincere craving for.

Both reissues (CD only) are available straight through Omnivore or Amazon.
Posted by spavid at 8:50 PM