My first exposure to The Posies?  On an unsuspicious morning in late 1990 I was backing my Plymouth (not so) Reliant "K" car out of my driveway to attend a full day of high school.  I was tuned into the predominant local hard/classic rock station.  DJ announced he was playing a song by a new band dubbed The Posies.  Upon hearing the name I conjured up an approximate image of this band being the stylistic heirs to the Mamas and Papas or something.  That assumption quickly dissipated upon hearing the tune, quite possibly "Golden Blunders."  In short, said DJ successfully led this horse to water, but I wasn't quite ready to imbibe another sip until roughly three years later, upon release of the band's third record, Frosting on the Beater.  'Higher learning' would in fact have to wait a spell. 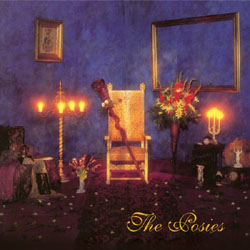 Essentially, I backtracked upon becoming enamored with Frosting in 1993, with the previous album, Dear 23 being something of a posthumous discovery for me.  Both records (and '95s Amazing Disgrace to follow later) are the subjects of a vastly overhauled reissues on Omnivore Records, getting the full remaster and expansion treatments, featuring a bevy of unreleased demos, outtakes and alternate versions, a good half of which weren't already covered on the At Least At Last rarities box set on Not Lame in 2000.

The Posies glorified demo of a debut album, 1988's Failure, was an often infectious exercise in witty folk pop.  Gloriously lucid if not so much ambitious, that nascent formula of the band's two prime movers Ken Stringfellow and Jon Auer would be extrapolated, enhanced and exponentially magnified on Dear 23, which found the duo fleshing themselves out as a four piece, aided and abetted by bassist Rick Roberts and longtime drummer to-be Mike Musburger.  With 23's austere hues, startlingly bold, and even ethereal sonic enhancements, you'd hardly guess this was the same entity that crafted Failure.  The ironing table and laundry basket motifs of yore were usurped by sobering universal themes wherein the band exuded grand, post-teenage symphonies to the world at large, often by way of exhilarating harmonies.  Almost thirty years on, "Golden Blunders" is still vividly poignant, outlining the consequences of romantic faux pas, with "Apology" mining a similar theme, more in line with a pleading ballad than the former's singalong rocker.  Despite it's pristine facade, Dear 23 boasts it's own brand of musculature, amidst "Help Yourself," "Mrs. Green," and the fully blossomed second half of, "Flood of Sunshine," the album's epic closer that loosely unfolds a la Led Zeppelin's "Thank You," of all things.  Song for song, Dear 23 may not be the Posies career defining moment but is the most impeccably manicured and graceful record they would ever attach their name to - not to mention one of their masterpieces.  The two CD redux on Omnivore features a bountiful 27 bonus songs. Unnlike the extraneous filler on so many other deluxe releases, the twenty-plus demos (some full band, but many Ken and Jon solo tapes) are genuinely revelatory and will give you an even better appreciation of the finished versions.  Also appended are the two sides of the Big Star/Chris Bell tribute single, initially released 1992 on Pop Llama.

Contemporary to 23 and Frosting, there was abundant ballyhooing in reference to the Posies newfound appreciation for Big Star - that and their supposed assumption to the throne of "power pop."  Both were exaggerations.  Virtually nothing on these two albums were as organic or straightforward as anything occupying #1 Record and Radio City, and even on Big Star's more idiosyncratic Sister Lovers, it can be a challenge to find direct parallels between the Posies and Alex Chilton (though both parties would later unite for a reconstituted Big Star).  Secondly, the Posies weren't three chord simpletons.  Catchy as-all-get-out, indeed, but far more sophisticated and brooding stacked up against a say, 20/20 or even a Matthew Sweet record.  If anything, they inadvertently carved out a niche for themselves that by happy accident meshed well with more pedestrian power pop. 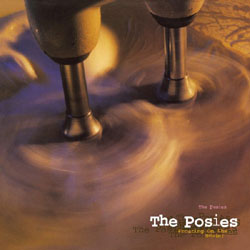 The Posies were about to make yet another quantum leap, one that would inextricably define them for the remainder of their tenure in the '90s.  Enter Frosting on the Beater, their 1993 watershed that stripped off the ornate prettiness and ethereal gestures of Dear 23 in favor of a palate that was markedly rawer, denser and gleefully amped-out.  It may have stopped well short of blaring and obnoxious, yet Frosting undeniably signaled an exciting departure for Jon, Ken, Mike, and newly recruited bassist Dave Fox. In fact, Fox's fuzz-laden bass played a discernible role in filling out the band's distortion addled aptitude on buzzy pop salvos like "Solar Sister," and "Flavor of the Month," and equally within the confines of the slow-boiling "Burn and Shine" and the brooding comedown finale, "Coming Right Along."  The Posies hook-meter registered an all time high on Frosting, so much so that even if "Flavor" or "Definite Door" graced your ears just one day in any given year, those tunes would stay etched in your cranium for the remaining 364.  And I can't depart any discussion of this album without observing that yet another of the band's watershed moments, the more bitter than sweet "Dream All Day," has personally served as a sister song of sorts to the Smithereens similarly vigorous but reflective "Behind the Wall of Sleep."  In keeping with the penchant of the expanded Dear 23, Frosting on the Beater is bonus-ized with a solid thirty extras - demos for most LP tracks and about an album's worth of outtakes (in rough-hewn 4-track incarnations) with previews of songs to appear on subsequent Posies and Ken Stringfellow solo records.  Hot damn.

Dear 23 is available as we speak from Omnivore and Amazon.  Frosting on the Beater is slated for an August 24 release date.
Posted by spavid at 7:41 PM