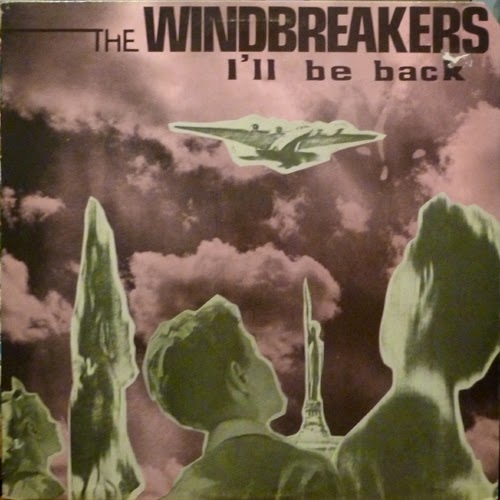 You know 'em, you (should) love 'em, Tim Lee and Bobby Sutliff, the duo aka The Windbreakers, one of the most genuine and consistently gratifying guitar pop acts to emanate from the deep south, circa the Reagan-era.  I've dedicated no shortage of space to them over the tenure of this site, be it via their Electric Landlady and At Home With Bobby and Tim cd reissues, not to mention a couple of Tim Lee side projects.  I have one more morsel from the Windbreakers oeuvre to impart, namely this 12"/ep, featuring the sitar-flavored "I'll Be Back," an emphasis track from the band's 1986 Run LP.  Like the Plimsouls?  You'll be totally down with this tasty jam.  It's backed with two exclusive tracks.  First up it's "Don't Take Her Out of My World," a cover of an early, pre-stardom Katrina and the Waves song.  The final selection, "Things We Never Say" was penned by Lee collaborator Howard Wuefling.

BTW, in case you weren't aware, Bobby was critically injured in a 2012 car accident, which you can catch up to date on here.  While he was on the mend, a tribute CD, Skrang! Sounds Like Bobby Sutliff was curated to raise funds for his recovery.  It's still available through Paisley Pop.

I am hoping that "critically injured" means that it was a horrible accident but that Bobby Sutliff has continued recovering as indicated in the article you link to.

I did buy the tribute and it is fine, although in the article you link to Bobby is being overly modest in suggesting that the covers surpass the originals.

Splendid share! I bought the vinyl for this EP, but don't have the equipment to digitize it, so this is a lovely thing for me.

FOR THOSE WHO MISSED IT: Tim and Bobby very kindly authorized me to post Boxing Day, their 1986 live album, at my blog (in lossless and high-quality MP3).

Free for the taking:

good one! having done the artwork for a bunch of his cd's, he's a super nice guy, and I know the accident was tough on him, but he's made it through, and is doing ok.....the 'Breakers were a big deal to jangle-lovers like me in the mid-late 80s, so this is yet another great one! thx!

Y'all should be aware Mr. Lee continues to make excellent music and with his lovely wife Susan Bauer Lee just released the excellent 33 1/3. His exploits can be followed at timleethree.com