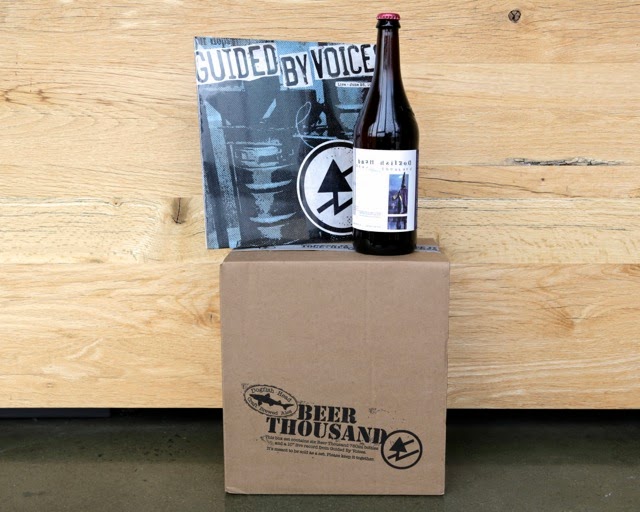 This one is pretty cut and dry.  2014 saw the twentieth anniversary of Guided By Voices breakthrough masterstroke, Bee Thousand.  Considering the onstage antics of figurehead Robert Pollard go hand in hand with booze, it was only a matter of time that the tradewinds of cross-marketing would propel the man in question to unite with a hip distillery to craft a hearty new brew.  An expanded Director's Cut reissue of Bee Thousand dropped on the album's tenth anniversary in '04, and I suppose the only fitting way to up the ante ten years later was to let the sweet amber flow.

You can peruse some pertinent details about the collaboration with Dogfish Head brewery here, where you will learn (if you haven't already) about a special 1000 pack bundle of the drink that was paired with an exclusive GBV 10" ep, featuring ten songs from a 1994 gig at New York's Threadwaxing Space.  This particular combo has long sold out, and to my knowledge the music hasn't been made available elsewhere.  That's about to change right about now.  Behold, a veritable dream setlist from the band's storied Pollard/Sprout/Mitchell et al incarnation, and a performance that can ironically be described as...sober.  Go ahead and get hammered.  I'm making this available in FLAC and MP3.

Thanks for this. Looking forward to it.

Despite looking for this everywhere, until now, I remained thirsty. Thanks!

Wow, thanks so much. I saw this tour, didn't get to try the beer (it was gone before GbV hit the stage), but wanted to hear this. Thanks!