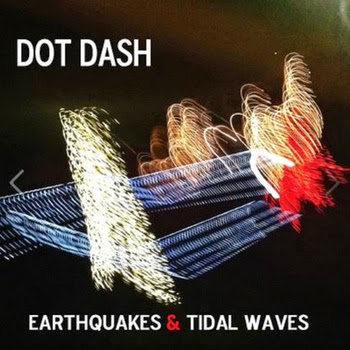 Between 2011 and '13 Dot Dash released three albums in as many years: Spark>Flame>Ember>Ash, Winter Garden Light and Half-Remembered Dream in that succession.  All stylistically concurrent, those records reliably presented us with approachable, Anglophile indebted post-punk, with a front-loaded pop emphasis.  Dot Dash prime-mover Terry Banks has his formula down pat by now, which largely spills over to album number four - albeit with a few tweaks.  First, the band decamped in North Carolina to track Earthquakes... with the ineffable Mitch Easter.  Secondly a new lead guitarist joined the DD ranks, specifically Steve Hansgen, formally of Minor Threat and Government Issue.  Neither of these developments are tantamount to a quantum leap for these fellows, yet Earthquakes... is indeed distinguishable from the band's trio of precursor albums.  And for the life of me, I can't quite point my finger on what that is.

Sonically, Hansgen contributes some wailing guitar salvos into the mix, predominantly on the leadoff "The Winter of Our Discontent" and "Rainclouds."  Not guitar magazine worthy shredding mind you, but a noticeable change of pace in DD-land.  The first half of Earthquakes... isn't weird or quirky, so much as hackneyed with Banks witty couplets hovering a few notches shy of trite.  "The only feeling left is a dull ache" he quips on "Tatters," and while it's not directly or even indirectly referencing his own combo, that's the sensation I'm left with to varying degrees here.  But not so fast.  Towards album's end we have a fine trifecta of tunes that go a long way in charting Dot Dash back on course.  The buzzing "Transparent Disguise" is downright visceral, "Thru the Dark" lights the way with passionate, pounding resolve, and "Semaphore's" fluttering axe squalls had me wondering if they enlisted the assistance of J. Mascis.  In the grand scheme of things Earthquakes... isn't a major shakeup for Banks and Co., but nor is it of the consequence it's cataclysmic title suggests.

Earthquakes &Tidal Waves is available direct from The Beautiful Music, or iTunes, Bandcamp and Amazon.
Posted by spavid at 5:54 PM

Great band! Could you possibly put up the 2nd record from the band Resolve? The first one came out on Artists Only! in 1995. Thanks!

I don't think I have this one.