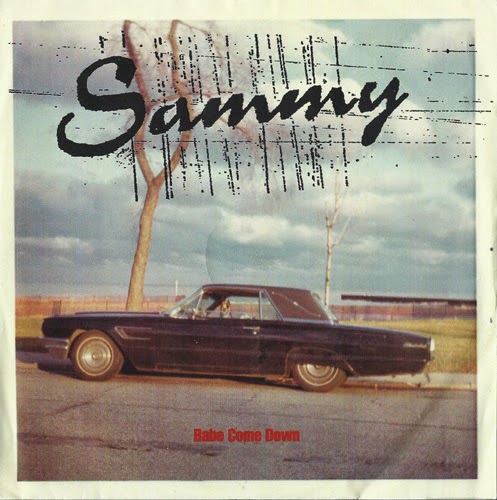 In June of 1992 I remember buying Pavement's Slanted and Enchanted without hearing a note beforehand.  The only things informing that purchase were reviews and personal recommendations.  It proved to be a safe bet, even if I wasn't as bowled over as some of the press was.  Pavement had something genuinely indigenous and fresh to offer, so much so that I would never guess that in merely two years time that a trio of New Yorkers dubbed Sammy would belly up to the bar with a full length that sounded more like an appropriate follow-up to Slanted than Pavement's own Crooked Rain.  Sammy, bearing their Debut Album in 1994, were a seemingly slavish imitation, right down to Jesse Hartman's virtually total usurpation of Steve Malkmus' vocal prowess...which perhaps wasn't so indigenous and unique after all.

Truth is, Sammy had some incredible moments in their own right, first and foremost "Babe Come Down."  Steve and Co. had "Summer Babe," and Sammy elected to keep up with the Joneses, sporting a "babe" of their own, sans the minerals, ice deposits, and nibbling on fingers.  With it's bittersweet melody, subtly bendy guitar line, and doleful but none-too-maudlin verses regarding a fading romance, "Babe Come Down" is indescribably evocative of an era that was yet to be tainted by social media, ubiquitous cell phones, and yes, blogs.  A spellbinding perfect ten, despite it's near-plagiaristic tendencies.  The flip, "Roach Girl," was exclusive to this record.  Another good 'un, albeit illustrating Sammy were considerably more pedestrian than their telltale heroes.  I made a later Sammy single available here some moons ago.

A. Babe Come Down
B. Roach Girl

Awesome stuff. Was just have a discussion about Sammy in a new music group of Facebook. Join us if you like, be glad to have you. Mention your blog quite often. https://www.facebook.com/groups/713737135405951/

Any chance for a re-up, please? Thanks!