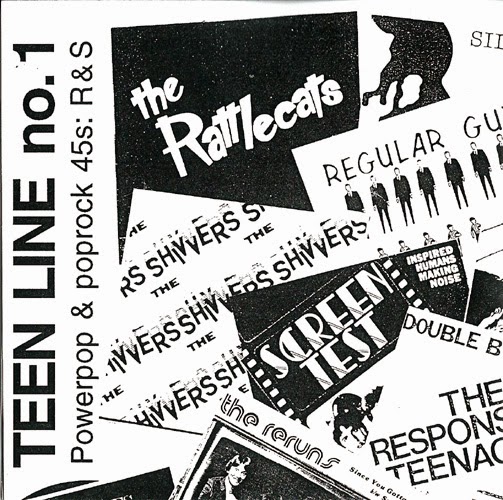 The Teen Line compilation series was the province of an archivist(s) falling under the larger Hyped to Death umbrella.  H2D was/is a fan-curated venture dedicating to exploring and exposing bygone DIY cult-classic recordings.  The Hyped to Death series itself was dedicated to American punk and like-minded variants thereof.  The H2D tent also housed the Messthetics series of homegrown post-punk and dissonant rock, extending to Europe.  The Teen Line compilations were more in my wheelhouse, with an emphasis on power pop singles, some exceedingly scarce and collectible.  Deriving it's name from a Shivvers song (included here), the eight volumes in the TL series were designed alphabetically around the first letter of the artist name.  R&S are the magic letters for Vol. 1, ironically not A-B, which featured later in the series.  Several letters of the alphabet are neglected altogether in the Teen Line collections, as future postings will reveal.  I'm working under the assumption that there were to be more Teen Line compilations to encompass the entire alphabet, but for whatever the reason the original concept for the series was never fully realized. 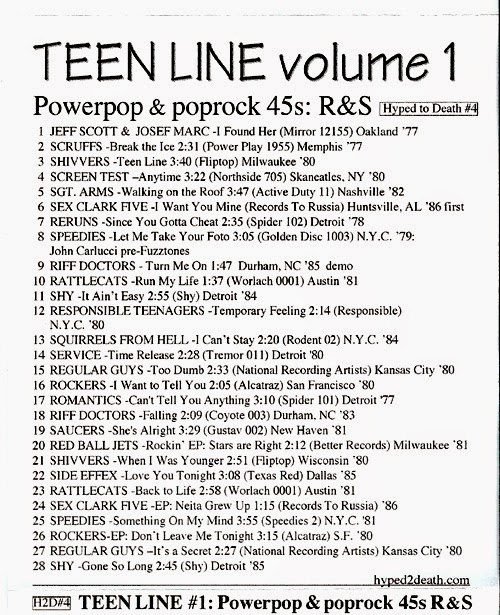 For a relatively informal string of cd-r compendiums, the folks at Hyped to Death exercised impeccable quality control, albeit their releases offered little in the way of household recognition.  In fact there's merely one outfit here your local person on the street might successfully identify, that being the Romantics. Combos like the Speedies, Scruffs, Riff Doctors, and the Sex Clark Five nonetheless left an indelible mark on those that were fortunate to encounter them, often wielding hooks and rhythms rivaling the par excellence output of more renown acts like the Shoes and 20/20.  In fact, think of the Teen Line compilations as the '80s equivalent of the Yellow Pills series.  An embarrassment of riches for any power pop connoisseur.  I don't have time to go into a play-by-play of Volume 1's teaming 28-song cavalcade, but the booklet does, and I've thoughtfully scanned it into the folder.  The tracklist is to your left.  Bear in mind, many of the tracks within were sourced from vinyl.

Awesome! Thank you. I look forward to the more volumes of this series in the future! Power Pop lives (sort of)!

I first stumbled upon one of these at a Boston-area used music store. Astonishing! It was one of the things that revealed yet another level of great music, not unlike this very website. I proceeded to buy all of them and I would encourage anyone so inclined to do the same.

As indicated by your write-up unfortunately the series petered out and not all letters are represented.

(And there is a gap in the numbering which on at least two occasions led me to tear apart my house (just a little short of Gene Hackman in "The Conversation" in one case) checking all the places where I had CD's stashed looking for the missing one, until I realized/remembered there was a gap.)

I don't think any of the series are anywhere near complete. I bought Messthetics when the guy was having one of his occasional sales and it's a great snapshot of the late 70s but frustrating to have so much missing.

Concerning the gaps or lack of completion in their series, I will emphasize that I personally would not cast any stones over that. At least they have done some fantastic work. There are still some "conceptual" comps of mine that never even made it to phase one (e.g., the fabled "Another Jangly Mess" collection(s) of R.E.M.-esque tracks from the R.E.M.-era).

P.S. Concerning R.E.M., I think we are just a week or so from the 35th anniversary of the first performance at the church. (And that makes me think, gawd am I old?)

Thanks for your comments. By and large, I'm with you Bruce. It's anyone's guess why this series fell by the wayside with such obvious gaps. Maybe the H2D folks will set up an online version of all of this stuff. As for myself I just hope the remaining cd-rs I have still play.

Thanks so much for posting this and I look forward to more of Teenline series in the future.
Bruce, I'd love to see and/or hear the playlist for your Another Jangly Mess comp. post a link here if you get a chance. I'm a huge jangle pop fan, REM and all the like minded bands.