I'm jumping up and down, I'm choking on a Tootsie Roll... 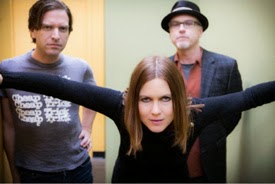 So it was announced in late 2014 that after 21 years apart, the Juliana Hatfield Three were reuniting - Jules, bassist Dean Fisher and drummer Todd Phillips.  It was the lineup responsible for the 1993's quasi hit album, Become What You Are, spawning the alterna-classics "My Sister" and "Spin the Bottle." This inevitably meant a requisite tour (in progress, btw) wherein the threesome would perform said album front to back.  While I wasn't utterly stoked on that aspect alone, the revelation of a new JH3 platter (crowd-sourced in part by yours truly) held even greater promise.  After all, Become... was the most substantive record of her career, post-Blake Babies, and maybe the reunion would rekindle some of those Clinton-era embers.

By the results of this year's Whatever, My Love, my suspicions were largely confirmed, as it housed some of Juliana's best songs since the 2001 Blake Babies reunion disk God Bless...  Closer to the release of Whatever, it was revealed that some of the songs were written and demo'd as far back as the mid-90s.  Coincidentally, some of those demos were temporarily made available as MP3s to the public via Jules website in the late '00s.  In fact dozens of songs were "leaked," most never released in any other iteration.  They've long since been taken down, but among the tracks I was fortunate to capture were no less than five songs that were re-recorded for Whatever, My Love, namely: "Invisible," "If I Could," "I'm Shy," "Ordinary Guy," and lastly "Now That I've Found You."  Now, wouldn't it be a hoot to hear demos of all the aforementioned?  You're in luck, because I'm making that proposal a reality - and not just for the sake of it.  These are some real, true-blue gems here, with hooks that leave miles of devastation in their wake.  But there's more.  I'm also including "Eye to Eye," my favorite selection from the unreleased, aborted, and quite fabled God's Foot album, the record Juliana had intended to deliver after Only Everything.  I also tossed in another good random website track, "Never Coming Out" dating back to 1996.

And it gets even better.  I'm padding this set out with seven long out of print b-sides from Juliana's '90s halcyon era.  "Ruthless," "Baby's Not My Name," and "Girl In Old Blue Volvo Disowns Self" parallel or surpass her most golden album cuts.  I should note that "Feed Me," culled from the I See You ep. is a rewrite of the Blake Babies "Boiled Potato."  A loose tracklist is below, but you dictate the sequence.

If you enjoyed the demos, please consider purchasing Whatever, My Love from American Laundromat, iTunes, Amazon and elsewhere.   Support the band!  One more thing - I re-upped a 1997 Juliana Hatfield concert in Toronto that you can check out here.

She's one of those artists that has *so much* material out there -- it's next to impossible to gather it all. I think I have a collection of 24 official B-Sides and about 70 other songs that she put on her web site.

And you had one I didn't have (the piano version of Got No Idols). So there's even more out there apparently...

Wow, love JH and her bands. Thanks so much for this!

Yikes - this is great. Thanks so much for assembling all of these and sharing them. A Huge treat.

Ah, Juliana Hatfield!
I've been looking for some of those demos & B-sides. Could you re-up it please?