Local Rabbits - This Is It Here We Go (2002, Brobdingnagian) 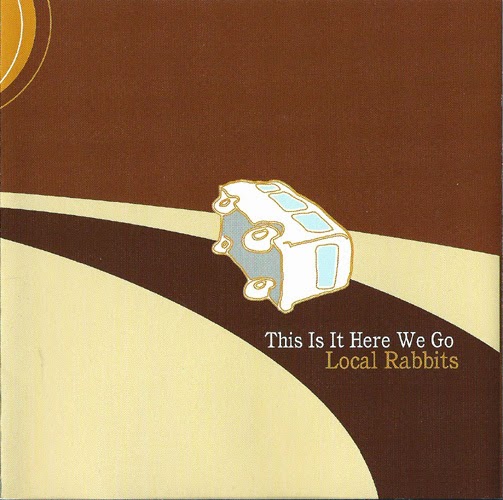 You're completely forgiven if you have no clue who the Local Rabbits are, especially if you live outside of Canada.  Before I forget, I'm pretty sure I made this available as a Mystery Monday feature, but after learning it was no longer commercially available, I'm decided to share it for the long haul.  LR originated from Montreal, but by the time they recorded TIIHWG they had relocated to Toronto.  Despite this album being an all time favorite of mine, I had a major aversion to the Local Rabbits at blush, namely their 1996 debut You Can't Touch This.  Don't remember much about it, except it's silliness - and the fact that it irritated the hell out of me.  It was more than convenient to write them off.  Then there was album two, Basic Concept.  A definite improvement, but they had yet to really bring their A-game.  Around 2001 I caught them opening for the Flashing Lights.  I was impressed, but still not a convert.  Then in 2002 they dropped da bomb, and it was dubbed This Is It Here We Go.  Up until then the Rabbits, IMHO, lacked an identity.  This time they adopted one.  Granted, said identity had been around the block a few times, and was typically the province of far more renown musicians, but the Rabbits incorporation of creme de la creme '70s rock maneuvers blended perfectly with their own exponentially rising acumen.

Deftly crafted and sophisticated This is It... not only brought to the fore a wealth of truly amazing songs, but showcased the burgeoning talents of the quartet's key scribes Peter Elkas and Ben Gunning.  The Local Rabbits had improved a zillion-fold since their You Can't Touch This-era, and could have probably delivered an album just as potent as This is It... had it purely been the product of their own internal muse, but a funny thing happened.   Loosely speaking, the band picked up on the modest but warm strains of Sloan's Twice Removed...and spiked that drink considerably with telltale glints from a few decades prior.  With what you might ask?  How about Steve Miller hooks, BÖC guitar fills, a smidge of Joe Walsh sneer, and plenty of Steely swank?  Yet there's no wholesale plundering or usurpation here, nor does any iota of This is It... sound the least bit Frankensteined.  The Rabbits thing was subtlety, and they prodigiously distilled only the most dashing morsels from those painfully overplayed classic rock titans.  "Never Had to Fight," "Pass It to You," and the plush "At Least You Got the Cake," tastefully tease in intermittent nooks and crannies, allowing your imagination to wander, or in my case, run completely wild.  Elsewhere, reverb soaked ballads "Poured All that I Got" and "Fill Them In," sound like the most pristine tunes Steve Miller never dreamed of, and the jazzy tangle of zig-zag riffs populating "The Fiery Wall" channels Spyro Gyra.

All of this may not sound dazzling, let alone innovative, but this record has somehow ensconced itself into my soul.  If you don't get it on the first spin, subsequent plays should do the trick.  TIIHWG is one of those rare albums that you wish you'd never heard, if only so you could encounter it for the first time again.

To my chagrin the Rabbits called it a day after this record Peter Elkas continues to perform and has three solo albums to his credit.  Ben Gunning hasn't slowed down much either.

Thanks for posting. New reader!

Link is expired. Can we get it updated?

I have the CD of the Local Rabbits, "you cant touch this", and did not know they put anything else out. "Touch" is pretty good, and at that point, at least, they were under Sloan's wing. You should give it another try. Quirky and all over the map, but an interesting listen. Anyway, thanks for this one!

Sloan who? TIIHWG is a wonderful, WONDERFUL album.

Thanks for posting this!

Link expired again, been looking for At Least You Got the Cake for YEARS, any chance of a reupload please? :)