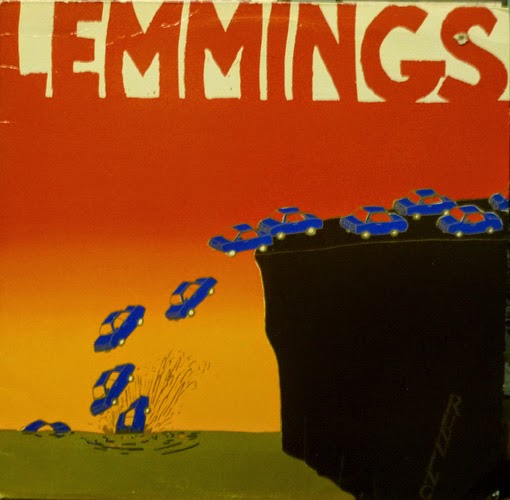 Full disclosure - I bought this one based on the "had to have it" sleeve alone, and while I'm not sharing it for solely that reason, the rather ironic image of cars diving off a cliff (like lemmings, duh) was a sizable motivator.  Apparently, the original inner sleeve was removed before I purchased it, as the album jacket itself bears not a shred of info on who the Lemmings were, where they hailed from, etc.  I have nothing to go on save for a 1984 copyright date.  And speaking of the '80s, only that cherished decade could have prompted such an intriguing, cartoon-ish album cover, something akin to a Far Side cartoon, eh?  Was hoping for punk or power pop.  Not quite.  The Lemmings weren't tethered to any particular genre, and with an uneven and nondescript batch of tunes such as those populating, Running, that fails to work to their advantage.  These folks have a vague wave-ish tilt to them, but they prefer polite organs over synths.  Furthermore, they insert decidedly pedestrian sax solos on the title cut merely upping the cheese factor.  "Murphy's Law" is English Beat on a starvation diet, 'Walk Along" busts a few socially aware verses, but in my book, Running's only true-blue keeper is the driving and quite gratifying "Brains." Maybe some of the others would have worked if they had been pared down from five minutes to three.  At any rate, the album exists, it's got a snappy cover and it's yours in ones and zeroes should you elect to download it.  Feel free to chime in if you have any specs on the Lemmings.

They were a band from Berkeley. Here's a link: http://bands.cedub.com/lemmings/

The Lemmings were the house band at Berkeley's Barrington Hall co-op, along with a loose confederation of fellow travelers. The band lineup on the album was
Tom Dean
Guy Brenner
Charlie Walther
Jeff Silverman

I am not quite certain who the drummer was at that time, we had a fair number of them including Chris Wolcott, Boo, Crazy Dave, and a few others. I think that Chris was with us for the album anyway. They played all over the bay area in the early and mid 80's; I first ran into them at the Fab Mab in probably '78 or so. We still meet occasionally for reunions.

Thanks Rick. I appreciate it.