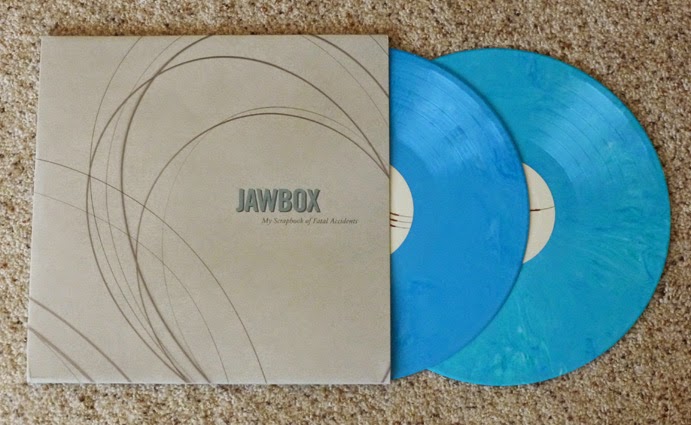 I just had a particular thought prior to writing this.  Had vinyl not taken it's steep and steady decline in the '80s and '90s in favor of CDs, we would have potentially been treated to an array of spectacular LP jacket gatefolds and ingenious packaging.  Of course, the worm has turned in the other direction in the last five to ten years, and now we're actually being treated to more visual and tangible delights than we have Samolians to shell out for.  Jawbox's odds and sods double album makes a good case in point.  My Scrapbook of Fatal Accidents was originally released in 1998 only in a compact disk iteration.  While any Jawbox fan worth their salt already owns this collection, they have a real incentive to obtain it again, as Arctic Rodeo Records out of Hamburg, Germany have done a marvelous job of repackaging it as a colored vinyl, double LP set.  Per the photo above, mine is outfitted in a seaworthy blue/turquoise hue, and from what I understand purple is still an available option.  Like the DeSoto Records CD incarnation of Scrapbook..., this freshly minted wax comes with not one, but two booklets, one of which is a veritable scrapbook in itself of on and offstage Jawbox photographs and concert posters.  The other is text only, spelling out a thorough discography and gigography.  Last but not least, Arctic Rodeo's reissue contains an extra track, a cover of Tori Amos' "Cornflake Girl," which first appeared as a hidden track on the CD version of Jawbox's self-titled parting album. 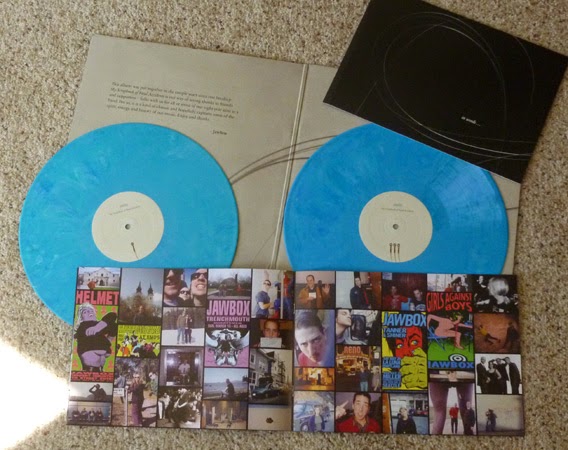 Perhaps it's not realistic to encourage those uninitiated with Jawbox's smart, tuneful post-hardcore incisiveness to delve in with such a tricked-out package as this, yet Scrapbook touches on all phases of their tenure.  Essentially divided into four quadrants, the records make a case for this D.C. quartet by way of a 1994 Peel Session (circa their For Your Own Special Sweetheart LP), compilation appearances and b-sides, four live numbers from their RFK Stadium performance in 1996 as part of the HFStival, and an assemblage of cover tunes featuring interpretations of REM, Buzzcocks, Minutemen, and the Big Boys songs among others.   The vinyl edition of Scrapbook is available from Arctic Rodeo mailorder, Dischord, and  RevHQ.  BTW, several years ago I posted an unofficial "sequel" to My Scrapbook of Fatal Accidents, prepared by a fan containing a whole 'nother set of non-LP and live Jawbox goodies that's yours for the taking here. 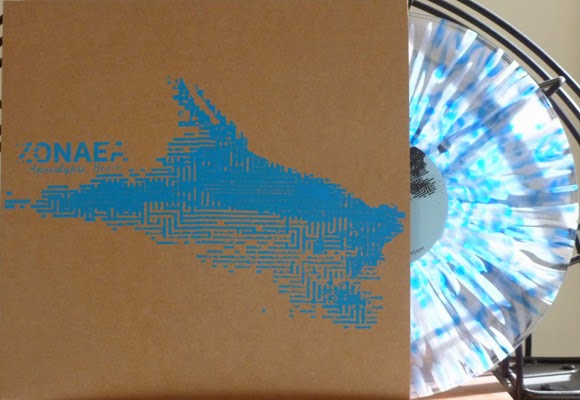 As the phrase goes, they come in twos.  It's a new Zonaea record, in stunning splatter on clear wax no less.  I introduced you to this Charleston, SC bunch two years ago by way of their first ep, As the Stars Collapse.  They're as noisenik and mathy as ever, and they've got a truckload of unwieldy dynamics to prove it.  The soft/loud/soft quotient is in full effect on the shape-shifting opener, "Ghost Cycle: Ghost Mom," as well as it's immediate follow-up "Ghost Dad." Shortly thereafter, the trio go to the trouble of covering one of Sebadoh's deeper album cuts (Harmacy's "Crystal Gypsy") however it's one of Zonaea's own songs, the comparatively melodic "Eviscerate Me" that could pass for a primo Barlow/Lowenstein composition.  Apocalypse Beach is available physically in an extremely limited edition of 150 copies, and it actually comes in a more colorful sleeve than what I've depicted.  It can be obtained through their Bandcamp hovel, and if vinyl isn't your bag, there's a name your price download option as well.
Posted by spavid at 5:27 PM

This sounds incredible! My pal got the purple version and I picked up the blue and when our LPs came we swapped the 2nd LP so we could each have one of the rad colors!