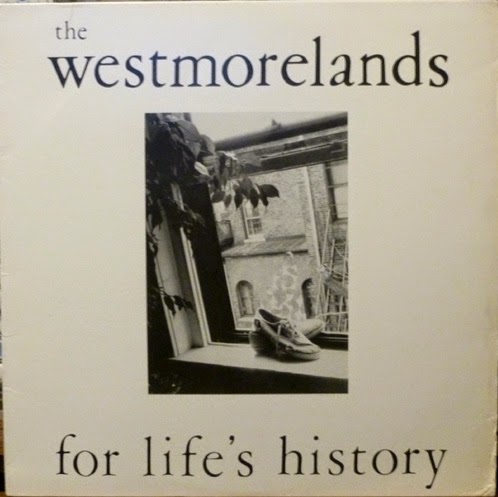 Seems to me that throughout the '80 straight up thru the mid-90s, you could throw a dart at any given day on the calendar and you'd damn near bet that a vital and inspired band from Boston had their first practice session.  By mere coincidence, just the other night I introduced you to a Beantown bunch dubbed Smackmelon, and to close the week out I present yet another group from the proverbial Cradle of Liberty, The Westmorelands.  The only comparison (and an informal one at that) I've seen tagged to this quartet is Morrissey.  In reality, it's more like period R.E.M., albeit these guys weren't anywhere near as cryptic or innovative.  Nonetheless they were a talented lot, and prime mover Michael Crittenden whips up an array of jangly, Peter Buck-informed salvos on "Low Tide" and "Forever."  Really nice record, but I should mention that for the concluding "Oscar Killed the Possum" the Westmorelands turn a complete 180, and exchange their aforementioned formula for rollicking pub rock a la Rockpile.  Not what I was expecting, but they pull it off.

Um, this is very good. Nothing earth-shaking or genre-breaking, but very good pop-ish stuff. And MUCH better than a lot of things that came out on major labels.

This just came on and I really liked it and looked for more info.

I found this indicating that a leading light in The Westmorelands was Michael Crittenden, who is known in the Michigan rock world:

"Rubbing elbows with talented musicians and music industry executives in Boston also gave Crittenden his first taste of the big-time. His rock band at that time, The Westmorelands, came within a whisker of getting signed to a major record label, so close Crittenden even dropped out of Berklee during his senior year.

“'But we couldn’t get enough traction to get a deal,' says Crittenden, who eventually finished his degree before returning to Grand Rapids in 1992."

please kindly re-up this..i'm looking for this album..pleaseeeee...thank you in advance..