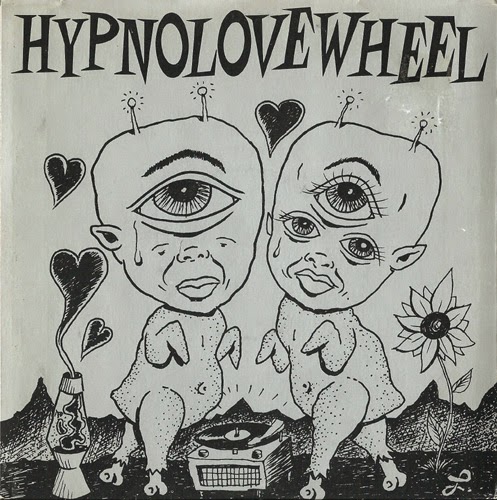 Back in the day, Hypnolovewheel were never one my go-to bands, but after re-investigating their music many years after the fact, I'm finding there was more there for me than I realized.  The Long Island quartet exuded no shortage of typical indie rock appeal, yet they brought to the table a psych undercurrent not to mention sonically dense song structures that most of their contemporaries couldn't be bothered with.  With it's swervy, flanged guitar splay and just enough sass to keep things interesting, "Wow" from a 1991 7," crystallizes Hypno's prevailing modus operandi in the span of two and a half minutes.  The tune would later materialize on their Angel Food album, with the more adventurous song-thing on the flip, "KMG-365" remaining exclusive to this wax. And speaking of wax, the guys would delve into considerably more ambitious terrain a year later on the four-sided 7" ep, Sybil.  The premise is simple, one side to showcase songs from each individual band member, but the material itself is anything but.

Stephen Hunking kicks things off via the buzzing "Beside Inside Me," a sublime slice of hypnotic haziness and mid-fi persuasion, bejeweled with a great hook.  Very reminiscent of what Edsel was doing at the time I might add.  It's fittingly followed-up by a noisome rendition of George Harrison's "Wah Wah."  Guitarist Dave Ramirez's side of the story is by far the most abstract and oblique - five very brief and predominantly instrumental, avant sketches, roughly in the same wheelhouse as early Sonic Youth, and more vaguely Wire.  Next up is Hypnolovehwheel frontman himself Dan Cuddy spewing all kinds of weirdness and eccentricities, employing cello, violin and whatnot.  Interesting, but nothing in his three song suite really does the job for me.  Drummer Peter Walsh rounds Sybil out with two jangly, melodic nuggets "Easy Journey to Other Planets" and "The Thin Ice," both of which are modest but engaging.  In fact, Walsh's songs are my favorites on here and I could easily for an album's worth of where these came from.

I should note that last year I posted a single by a Hypnolovewheel/Yo La Tengo offshoot called a Very Special Pillow which you can read about and download here.

Side Stephen
Beside Inside Me, Wah Wah

Side Dave
KMG-366, Down With People, Giant Marble, Sanatarium, Planetarium

Side Peter
Easy Journey to Other Planets, The Thin Ice

These guys are good friends of mine. Seriously underrated band.

This is a great upload. Any chance we could get this in a lossless format?

I know you're pretty tight with them EVR. You have good taste.

Perhaps I can create a lossless version at some point. Thanks for your interest Jonathan.

A few years ago the band was going to put out a retrospective on Stephen and Dave's label Geodesic. I believe it was supposed to be called Ancient History. Do you know what happened to that project, EVR? I recently tried to digitize my own copy of the Sybil EP, and I appreciate this very much as you do a better job of it than I. Love this band -- thanks spavid!

Think life just got in the way. Might not have made financial sense to do either. Dave recently joined Yo La Tengo for a cover of I Dream Of Jeannie at their DC show

Makes sense, EVR, although it's easy enough to put music on Bandcamp or Soundcloud as Dave and Stephen have done with their solo material (as Electrostim and Dew Claw). I guess I will always wonder whether there is unreleased Hypnolovewheel in the vaults. Check out https://electrostim.bandcamp.com/ and https://dedewclaw.bandcamp.com/

Here's what Dave's been up to lately

Jonder, Dan Cuddy and I were in Junior High together outside of Buffalo in the late 70s until he moved to Long island, where he formed a band in High School with Dave and Steve (and Chris Xefos). Dave ended up going to college in Fredonia NY where we became friends. Weird!

I'm thanked on a bunch of their records too. I love these guys!

Sorry I haven't been doing a better job in tending to the comments. Your input and links are thoroughly appreciated. I think I need to make Hypnolovewheel more prominent in my soundtrack.

Gosh Spavid, I assume you're out shoveling :)