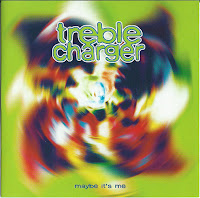 Much like the end of summer itself, Treble Charger's third and most accomplished jewel in their crown is lovingly bittersweet.  The Ontario quartet's power pop stunner Maybe It's Me arrived after a pair of merely okay albums, NC17 and Treble Charger that I would loosely compare to Sloan's Smeared.  Maybe, on the other hand, was tremendously robust and sonically layered, each song chockablock with a self-contained tackle box worth of hooks to call it's own.  The songwriting was considerably more developed and thoughtful as well.  Though it does brandish notable studio luster (and a walloping, big fat '90s rawk sound), Maybe It's Me is something of a major label miracle in that the quality control is really on the up and up, parallel to records of the same era like the Doughboy's Crush and Summercamp's Pure Juice.  The Treble's decision to tap Lou Giordino as producer didn't hurt either.  Two more T/C albums followed, 2001's respectable Wide Awake Bored, and Detox in '03, the latter of which I thought catered a little to closely to a demographic that was frankly beneath them.  At any rate, they had all their ducks in a row on this one.

Get it from Amazon and iTunes
Posted by spavid at 1:52 PM

I always thought this should've been their breakthrough, love the song "Red". Speaking of Summercamp, did they ever follow-up "Pure Juice"? That's another great album from the 90's!

Summercamp recored a second albu, but was never released. Bummer.

Any chance for re-up, please?

This is now available again from digital retailers, so I'm not really at liberty to share it anymore. My apologies.

No worries, I'm happy to purchase it. I just assumed it was out of print. Just found it on Amzaon very reasonably priced. Thanks for the heads up and for the awesome Blog!