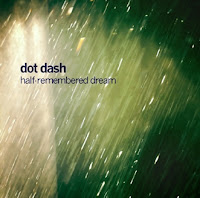 Three albums in three years?  What is this, the 1970s?  I suppose when you're not signed to a label that doesn't require you to tour nine months out of the year anything is possible.  As I've mentioned in previous features for their Spark>Flame>Ember>Ash and Winter Garden Light albums, this Terry Banks-led D.C. quartet are not about full fledged Wire worship, as their moniker might suggest.  There are vague parallels (coincidentally in the vocal department) but as evidenced on the bulk of Half-Remembered Dream, Dot Dash are downplaying some of their chillier post-punk inclinations for a slightly more streamlined guitar-pop bent.  Even when they're tamping down demons of yore on "Here's to the Ghosts of the Past" and decrying character flaws in "Shopworn Excuse," the actual delivery of these songs is fairly strident.  Elsewhere, "Bloom/Decay" and "Do Re Mi" travel a similar sonic motif, simultaneously offering some of Dot Dash's boldest melodies to date.  Half-Remembered's real corker would have to be the penultimate "A Light in the Distance," an incisive, power-chord driven slammer that propels the band into Superchunk-esque punk environs.  The concluding "The Sound in Shells" brings things back down to Earth for a smooth touchdown.  Perhaps not as dazzling as last year's Winter Garden Light, HRD makes the case that's it still a great time to be a Dot Dash fan.

Half Remembered Dream is available digitally through Bandcamp, iTunes, and Amazon, and physical CDs can be purchased through The Beautiful Music. A two song taster is available by way of Soundcloud, here and here.