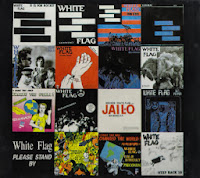 Word went out late last night that White Flag frontman Bill Bartell (more commonly referred to as Pat Fear) had made his way into the choir invisible.  The band gestated in the early '80s as a loose parody of the Los Angeles hardcore punk/skate scene.  In the process, White Flag developed a solid body of work of their own, that at moments paralleled the finest material of their So. Cal antecedents.  The 34-track Thru the Trash Darkly, which I originally posted in 2007, focuses on their early and most revered material.  Bill and White Flag continued on in various permutations throughout the remainder of the '90s and well into this century in fact, often collaborating with the Posies Ken Stringfellow.  Please read my earlier White Flag write-up for a few further details and a complete tracklist which I don't feel like repeating here.

Wow. I probably wouldn't have heard about this if not for your post.