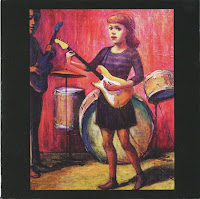 Throughout the '80s and '90s, Minneapolis/St. Paul was the collective gift that kept on giving, seemingly producing more bands than California and New York combined.  Not an entirely accurate analogy but it sure felt like it, and John's Black Dirt were part of the Twin Cities mix.  Snatched up in the Grass Records signing frenzy of '94, JBD played a relatively traditional stripe of indie rock that was way more Chapel Hill than Seattle.  I could easily envision these three lads sharing a bill with Polvo and/or Archers of Loaf.  Heavy goes it on the dynamics too, adopting a similar modus operandi to Seam.  Unfortunately, JBD weren't quite as consistent as their aforementioned contemps, but Perpetual's good 'uns shine like a zillion bucks, with the tuneful soft/loud surge of "Lights Flashing," and "Buicks" bittersweet tinge floating my boat just fine.  Props to "Pugilist" as well. Per a couple of blurbs on Amazon's page for this disk, an unreleased follow-up to Perpetual... is sitting in a vault or closet somewhere.

It hasn't slowed down up there. Seems like half the new bands I like (and some that I don't) are from Minnesota (Mostly Minneapolis, sometimes Duluth, hardly ever St. Paul.)

I was in this band let me know if you want a copy of the unreleased record. I'll send it to you gratis

Thanks Seth! Would be interested in hearing it. You're welcome to send a download link to my email addy (in my profile). No big attachments please! When was this unreleased album recorded BTW?

You kids and your download links! I can send you a link to the soundcloud page which has both records. it was recorded in 1995 with Dave Fridmann (Flaming Lips, Mercury Rev, etc). We were dropped by Grass after the recording was finished. They had been purchased and turned into Wind Up and were looking for Creed to walk in the door.