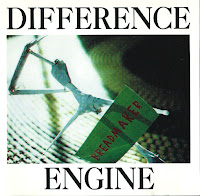 Once upon a time, bands from Ithaca, NY ruled the WORLD.  Well, ok maybe not...er, try not in the least.  Whatever the case, that's where Difference Engine's origins emanated from, and at the very least they deserved something resembling a national audience.

Approaching their records with a distortion-saturated ethereal sonic tact, it was convenient to deem D/E as dream pop, shoegazer, et al, but by my estimation they were one step ahead or behind that tricky curve.  The co-ed quartet's first single, "And Never Pull," certainly evidenced parallels to My Bloody Valentine's gauzy latticework, but D/E pitched a curveball on that song, namely a petite burst of static that appeared at two-second intervals, just like the emissions of an aging cassette in a creaky tape deck.  This was the product of effects, something few of their contemporaries could be bothered with.  It's that sort of damaged beauty that made D/E's catalog a little more unique, particularly for an American enterprise.  "And Never Pull" reemerged on their 1993 mini LP, Breadmaker, but with much of that aforementioned static tamped down a notch or two.  Other tracks resembled For Against, and I certainly had no complaints with that.  A harder to locate followup album was released in 1997, titled Calidad. It would appear that prior to the release of Breadmaker the band had moved shop to Rhode Island. 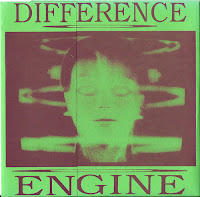 So, you might be asking why I've sat on this pair for so long.  In 2009 I was informed that a reissue of Breadmaker was literally imminent, via legit download and on CD with a bonus track.  Thus far I have seen evidence of neither, so in the meantime I thought I'd put them up for public consumption.  Enjoy (you will).
1992 single
A. And Never Pull
B. Sea Change

I'm afraid I don't have either. Sorry.

I have had the pleasure of both knowing this band personally and seeing them live several times, along with having had the honor of playing alongside them in the same showcases. They were incredibly talented (and generous to their friends and co-musicians) and their live shows were amazing. It's a crime that they never made it big. Their music has totally stood up, too. Breadmaker is brilliant.

As an aside, they have at least 3 7" that I know of: 5 listens/ fall, and never pull/sea change and a split with the nonpareils: difference engine-flex lavender with the nonpareils-exit. They also had a cassette release of their earlier material.

Cool blog!!
Can you re-up these albums?
Cheers!

Thanks for this post!
Actually Saint Marie Records will reissue this album in the near future :)
http://www.pledgemusic.com/projects/shoegaze/updates/41513?utm_campaign=project9843&utm_medium=email&utm_source=pledgemusic