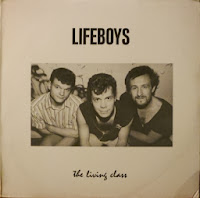 I made a blind purchase on this one a few months back, and am still weighing whether my decision was a smart one.  A Windy City triple-threat, with something of an identity crisis I might add, (the) Lifeboys initially impressed me with this disk's opening salvo, "Acts," boasting a sonic penchant not far removed from the likes of Rhythm Corps (Method) and Frōzen Ghōst, throwing in a dab of social consciousness as well.  Quite a hook on this one too.  This is followed by the considerably less serious "Rebel Rock/Noble Roll" which bears a shouted, '80s rawk chorus that would be downright cheesy if the remainder of the tune didn't compensate (fortunately it does).  "Talking With People From France" closes things out on a sardonic note, wrapping itself around a fun little hoe-down riff.  You be the judge.

Hello, I really liked this post. It had been quite some time looking for some music this group, so I appreciate the information and data. I also I have a place to distribute music, film and underground literature, I've added to my links. I hope that you recommend my blog to your links: http://ergofelixculpa.blogspot.mx/

No more, I wish you good evening. GREETINGS