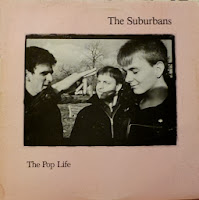 The Suburbans were a nervy strum and drang trio, presumably from the NYC area.  Hard to believe this came out all the way back in 1980, given that just about every logic comparison I seem to draw is past the Carter-era, namely The Feelies, Misison of Burma, and even the Figgs.  In fact, singer guy/guitarist Jamie Rosenthal's vocal timbre falls roughly in the range of Burma's Roger Miller and the Figgs Mike Gent.  There’s a little backtracking in a Velvets kinda way, not to mention the Suburban's occasional knack for pulling off slight Brit Invasion maneuvers, but these similarities are dim and likely coincidental.  The band's DIY recording setup is devoid of effects and studio trickery, lending a minimalist stride to The Pop Life.

The frenetic chord-wrangling that grips “No Use to Cry” suggests the Suburbans may have gotten some face time at CB’s or Maxwells during their run.  "Saturday Night Blues (Going to a Party)" is a sprite rave-up that's equally fun.  Other highlights abound ("Suburban Rock" and "I Don't Undertand"), and unfortunately a few clunkers (you're forgiven if you pass on the parodic disco funk of "I'm a Good Dancer").  If anyone can shed a few further details on the Suburbans, please chime in, because there isn't squat to be had about these dudes online.

Could you lease re-up this one?