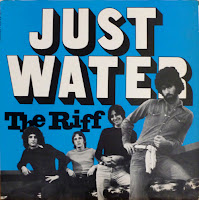 It's long been said that man cannot live on bread alone...but how about water?  Just Water.  I had seen this one advertised in more than one place with the coveted "power-pop" tag attached, and since I was a bit intrigued by the cover I finally opted to take the plunge a few months ago.

With roots in Binghamton, NY and having made a full fledged migration to New York City by the late seventies, Just Water were able to ingratiate themselves onto numerous bills at iconic venues like Max's Kansas City and CBGBs, at a very pivotal point in music history.  Thing was, they were hardly a punk outfit - at least as far as the The Riff plays out.  In fact, the proceedings commence with a couple of characterless hard rock tunes.  Things turn on a dime when "They Live by Night" kicks in, which boasts a snarling guitar lick and a genuinely smokin' hook.  The melodies keep rolling in on side two, particularly on beauts like "Play it Loud" and "Wayward Boys."  Before I let the needle hit the groove, I was itching for Just Water to move me in the same manner as Big Star and the Raspberries.  I got a tad of the latter, but the most accurate comparison I was able to take away was The Who - not so much in the performance department, but more so the song arrangements.  Mitchell Danick ain't no Daltry, and six-string slinger Danny Rubin doesn't exactly encroach into Townsend territory either, but give The Riff a spin and you'll get my drift...or should I say "riff."

Shortly after ripping this wax, I became aware that the entire album had been reissued, both on CD and via legit download.  I should mention that the collection it appears on, Downtown and Brooklyn, is three disks long and contains four times as much music.  In short, I'll only be leaving this up for a limited time, so consider this as merely a sampler.  You'd do well to buy Downtown..., not only out of deference to the band, but because it's bound to be a vast improvement of my static-ridden MP3s.

Don't know much about these guys.Look forward to a listen!

Can you please re-up this ?

Please re-upload this. Thanks!!

Thank you for the re-upload