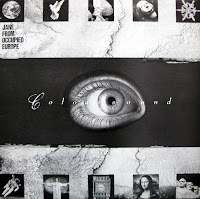 If the name Jane From Occupied Europe rings a bell, you've probably encountered the Swell Maps album of the same name.  As it turns out, a Salisbury UK five-piece adopted it as their moniker of choice, and managed to eke out this album and a couple of eps.  In 2009 JFOE unveiled their own blogspot page and hosted MP3s of their entire recorded output, but since the links have expired, I took it upon myself to make Coloursound available since I'm nothing short of mightily impressed by it.

Having little in common with the Swell Maps' shambolic, post-punk cacophonies, JFOE clad the chiming appeal of C86 indie pop to unmistakable psyche overtones without overdoing either.  Think very early Stone Roses with murkier fidelity and perhaps you'll get the gist of Jane's fuzzy charm.  Cleaners From Venus and Telescopes wouldn't be inaccurate signposts either..  Enjoy, and btw, I'm finally going to have the opportunity to rip some more vintage vinyl in the coming days.

Probably the best blog on the web for years... thanks for your work!!!
antonio

Please link to mine at http://bannedfromtheempire.blogspot.it/

Is there anyway to get a link to Little Valley Town?

Could you please re-up ? Thanx in advance !

Thank you so much !