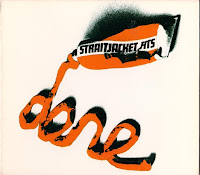 I was happy to oblige a recent request for this ep, which I probably hadn't listened to in nearly a decade.  As I gave it a spin today, it dawned on me how much the Straitjacket Fits sounded like Radiohead, at least at this juncture in the career.  Considering the other sound of the coin however, I couldn't honestly say that Radiohead ever sounded like the Straitjacket Fits.  Funny how the comparison thing doesn't always work out evenly.  At any rate, Done was the precursor to the Fits final album, Blow offering two album cuts and two non-LP b-sides.  By now, Shayne Carter and Co. had largely extricated themselves from the feedback-ridden cocoon that colored their noisesome 1988 debut, Hail.  While I have an appreciation for Blow's notably more lucid hues, I still deem that record to be less distinguishable than just about anything else they attached their name to.  Would have been great to have been treated to a follow-up, though the Fits obviously (and perhaps wisely) opted not to overstay their welcome.

I have this EP too and IIRC this version of Spacing is a different recording to what was on the Blow album.
As a standalone release its a good EP.