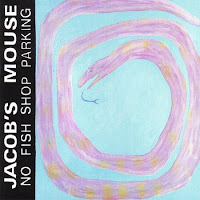 Jacob's Mouse were a raucous, noisenik contingent hailing from the boondocks of Britain who largely went unnoticed, or to put it in more colorful terms were metaphorically trampled by all the Madchester, shoegaze, and Brit-pop trend-hoppers who were making a headlong dive for Glastonbury and Reading mosh pits. "Twist" is the choicest morsel No Fish Shop Parking has to offer, with it's bruising, angular slide guitar riff, not to mention something resembling a damn decent hook.  Bootstrap blog claims this ranks with The Pixies, but surely that's a bit of a stretch, albeit a vaguely similar aesthetic. 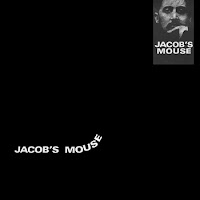 In addition to NFSP, Jacob's Mouse have also digitized their 1990 Dot ep (depicted to your left) for consumption on, you guessed it, Bandcamp!  Conjuring up and even more cacophonous alchemy than what would follow on No Fish, it's no surprise that the five demonstrably dissonant song-things comprising Dot would pass muster with Kurt Cobain, who professed to being a fan of JM.  The group's abrasively-endowed penchant earned considerable praise and promotion from John Peel as well.  Factoring in how gonzo Peel was for The Fall, it's little wonder why he gravitated towards Jacob's Mouse, a trio who arguably raised Mark E. Smith's esoteric template to a decidedly higher, distortion-soaked plateau.  Transport thyself to Bandcamp, and immerse yourself in these delights.
Posted by spavid at 6:15 PM