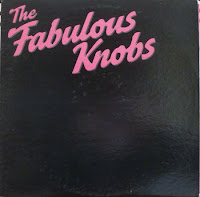 Here's one I've been sitting on for awhile, for no particular reason...which I find is often the best reason. The Fabulous Knobs were among the most revered players in North Carolina's fabled Comboland scene throughout the late '70s-mid '80s.  A co-ed five piece, the Knobs focal point was Debra DeMilo, who has been noted as adding a soulful element to her male compatriots.  Taking a relatively straitlaced pop/rock formula and imbuing it with mainstream wave tendencies, that all-enticing "power" quotient rears it's head on the tracks that bookend this record, "Next Big Thing" and "Tired of Hearin' About It," easily winning out as my favorites.  Don Dixon and Mitch Easter earned early production and recording credits, respectively, for the EP, though it hardly bears any of the "new south" sound that I've made a habit of mentioning so frequently.

Debra parted ways with the Knobs in '84.  Upon recalibrating the band as The Woodpeckers, none other than Dan Baird filled the vacant vocalist slot, but he wasn't long for that position with his new band The Georgia Satellites in the offing.