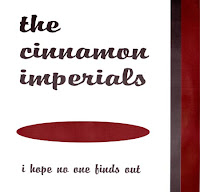 Released at arguably the height of the Bay Area punk/hc '90s revival, The Cinnamon Imperials put out this excellent 45 of spry punk-pop ditties that slotted somewhere north of twee, and a few notches south of that whole riot grrrrl business.  Actually, the Imperials were only comprised of three of the fairer sex, and one of the opposite (the drummer, of course).  Nothing the least bit contrived here - a quartet of minute and a half songs (or thereabouts) that somehow don't draw particular attention to their brevity.  Think Sleater Kinney, but more fun and less angular.  With the exception of bassist Mikel Delgado who graduated to Whysall Lane (Adam Pfahler's post Jawbreaker outfit, circa 2005), I don't know if the remaining Imperials went onto to anything else.  I believe I have a C/I split single lying around somewhere if anyone is game.  Enjoy.

Thanks for uploading this. I am stoked that someone remembers and likes this record after all these years!
Sincerely,
Guy Drummer

Thanks guy drummer! Was a pleasure to share this.