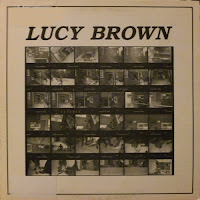 For a handful of you thirty/forty-somethings in the audience, the name Lucy Brown might ring a bell.  Not a woman, rather a D.C. area metal/funk hybrid who released a self-titled album for Atlantic Records in 1991, and had a video in lite rotation on MTV.  The quartet was commandeered by a soulful firebrand of a mouthpiece in Gene Hawkins (R.I.P.) whose timbre approached that of Living Colour's Corey Glover.  In fact, juicy Lucy sounded like Living Colour.  A lot.  So why am I rambling on about this bygone, headbangin' footnote?

Turns out LB started life as a far different beast before enlisting Hawkins as their frontman.  The album I'm sharing today was recorded by the band when they were a trio, with bassist Scott Llewellyn taking care of vocals.  Even in '88 they were dabbling in funked-up bass lines (try "Silly Mind" on for size), but a good half of this record skews towards garden variety, if not relatively melodic hardcore.  However, two excellent post-punk anomalies, "Clouds" and "Don't Know Why," each bearing sweet, echoing chords, are what make Lucy Brown worth investigating.  Stay for the remainder of course (uneven as the going may get), but I bet that aforementioned pair is what will encourage many returns.  Not much info is out there regarding this phase of LB's tenure, save for the fact that this record more or less stuffed.  For what it's worth, the Gene Hawkins-era of the group was commendable, albeit an almost 180 from what you're going to hear amidst these particular grooves.

HOLY SHIT, thank you for this! Lucy Brown played frequently at our local club in Trenton, NJ during the late 80's and very early 90's. At some point I owned one of their t-shirts, which to this day I miss and will always consider a favorite. There was also a popular demo tape that made the rounds in central NJ. LB frequently shared the stage with the Bouncing Souls, who were also, at that time, somewhat of a RHCP-type band.

Would you consider re-upping this please as well as the self titled released on Megaforce if you have it. Saw them at the New Music Seminar in NYC early 90's and was really impressed. Thanks!

I fixed the link Donnie. This one sounds nothing like the Lucy Brown I suspect you're more familiar with. Will have to think about sharing the other one, as it's not the type of music we usually cover on here.

Hey thanks alot. I'm very curious to hear this one. As far as the other one...I just can't find it anywhere! I know it's not that great. Just trying to replace the disc I lost years ago:-) Maybe you could email me a link? Thanks again for this one.

The EP they did after the Atlantic debut(Five Dogs Dead) is also solid. Gene was a nice guy, he used to come see my band play in College Park, MD a few times.

file expired, could U pleaz reup it? thanks anyway ciao

Link expired, would appreciate a reup.

Saw then at the Pipeline in Newark...and thought about them today 30 yes later