Jo Broadberry and the Standouts (aka Local Operator) - s/t (1980, Revenge) 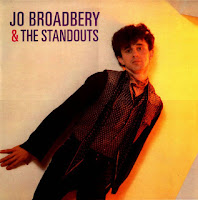 I had a request for this one, as well as a re-up of the second Jo Broadbery album, The House of Love, which I shared all the way back in 2008.  Technically, Jo Broadbery and the Standouts was originally released in 1980 on Virgin Records, and was labeled and credited to an entirely different music entity, Local Operator.  Under that original guise, the album had a proper title, Pushing Out the Poets, which didn't carry over when it was reissued with thoroughly new sleeve art.  I don't have the scoop on why such a drastic alteration was called for, but my guess is that the label wasn't satisfied with the "optics" of the Local Operator version of the record, and thought that they could better market the group with Jo posing on the album jacket.  Complete speculation on my part, but I believe my theory holds some water.

In a nutshell, this adeptly penned power pop album delivers in spades.  It's heavy Elvis Costello slant serves not so much as the end, rather a durable means for Broadbery and Co. to build on.  Super tight arrangements and the hooks are nothing to sneeze at either.  The aforementioned sophomore record, House of Love proved to be the group's final offering, and tragically, Jo would pass away in 1987 at a relatively tender age.

PVAc to 44.1 kHz blog was originally hosting this one, but the download link isn't functioning.  I took it upon myself to grab it ages ago, so I hope they don't mind we're re-homing it.  Enjoy (or not).

I was going through your beyond incredible blogpage and noticed that you still have some of your oldest posts using evil Rapidshare (i.e.: The Happy Hate Me Nots) - just so ya know (and I would REALLY like to get that one...my copy, along with all my vinyl, got sold without my permission). Also, I didn't go farther back than that, but if you have the album by Big Big Sun that would be excellent. Thanks!

The Happy Hate Me Nots link is now fixed. All the Translator stuff is back in print. You can get it from Amazon:

Damn, you've stumped me on pretty much everything else you requested! Might poke around online if only to satisfy my own curiosity.

Any Winter Hours would be amazing. But if you don't have it, I don't think it's going to happen.