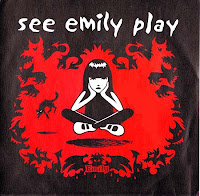 Theme split single, the rather obvious motif being a five letter moniker starting with "E," and ending in "y."  I'm a sucker for Pink Floyd covers, and next to "Arnold Layne," "See Emily Play" is my favorite morsel from the Syd Barrett era.  The Lies twist on it isn't particularly revelatory, but faithful almost to a fault, sans the Brit accents, not to mention half as thrilling as the original.  The flip side's unknown quantity Knit Separates interpret a song by the Television Personalities that I'm entirely foreign to, a strummy melancholic ballad titled "When Emily Cries," which goes down easy by way of it's vicarious 1960's vibe.

A. The Lies - See Emily Play
B. Knit Separates - When Emily Cries

could you re-upload this one maybe? that'd be nice!

hey spavid - thanks a lot for responding to my request. anyway, it says "This file has been deleted due to inactivity."

It should work now. Sorry for any confusion.

thanks so much for this. i listened to the emily cries tune now three times in a row and couldnt say 100% yes or 100% no if this is the knit separates with jason honea, glenn donaldson, loren chasse and steven r. smith or another band wth the same name. do you know?