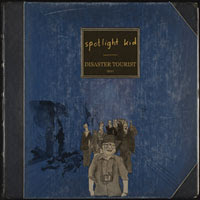 I believe the year was 1991 (or was it 1990?) when My Bloody Valentine, Lush, and Slowdive aligned themselves into the three-pronged gateway drug that ushered my psyche and senses into what would later be regarded as "the scene that celebrates itself."  Yep, I had caught the shoegazer bug in colossal fashion, but little did I know at the time that said trifecta were about as godhead as that mind-bending niche would get.  Sure, there were others to heap praise upon: Swervedriver, the Lilys, Fudge, and Bleach to name a few, but none of them (and the scores of identikit dream-popsters to follow) quite ascended to the bar par-excellence raised by Kevin Shields and Miki Berenyi.  All these decades later, Nottingham, England's Spotlight Kid have floored me to such an extent with their latest, Disaster Tourist, that had this record arrived in the early '90s it could have competed with the coveted vanguard I mention at the beginning of this piece - and as far as the current crop of dream-pop revivalists go, they beat their contemporaries handily.

A teaming co-ed six-piece, Spotlight Kid's synthesis of shoegazer pioneers of yore frequently borders on the derivative, but what makes Disaster Tourist so unceasingly compelling is the sheer aptitude of it's creators, who are not only adept at wielding potent, tremolo-smacked maneuvers, but armed with a devastatingly melodic fortitude to match.  Engulfing surges like "All is Real" and "Forget Yourself in Me" climb to billowy sonic heights, while conversely, "Lifetime" and some of the more lucid latter album tracks glide back to Terra firma in a smooth-as-silk comedown.  There's some sheer magnificence wafting its way through this platter, and if the proper eleven song album weren't enough, the version coming out on Saint Marie Records this very week tacks on five bonus cuts.  The crazy irony about Disaster... is that word went out last week that the long awaited follow-up to MBV's tour de force Loveless is finally slated for release before years' end.  Normally one would assume the Valentines have no competition in this arena...but perhaps Kevin and Belinda are about to be beaten at their own game, dare I say.

I was forced to nix the link to two songs I was sharing, so you'll have to rely on thirty second samples from these retailers: Saint Marie, Amazon, or iTunes.
Posted by spavid at 6:23 PM

This is very fine, the first offering reminds me of MBV very much...let's say circa Loveless & Tremolo. BTW I know you know your stuff Spavid but I just wanted to mention two of my personal shoegaze faves to the list, EOST whish I'm sure you know what stands for and a more obscurely named band called Here who hailed from behind the iron curtain! check out We are...Here and Swirl for some more shoegaze essentials. As always...enjoying your shoegaze posts.