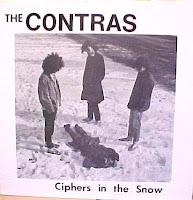 Sometimes twangy, sometimes sneering with punky bravado, The Contras never take themselves too seriously, yet throughout Ciphers in the Snow they play barnstorming rock and roll as if their very lives depended on it.  A representative case in point is the searing, rapid-fire "Man Killer," which happens to segue smoothly into "Hava Nagila," a traditional Jewish party song...and it's not nearly as awkward as it sounds.  Hopped-up, garagey fireballs "Carpet Man" and "Adam and Evil" are nearly as spirited, while "Cat's Tale" dips ever so slightly into the Paisley nickel bag.  We're even treated to an ABBA cover.  Here's what Lucid Culture had to extoll on the Contras:

Snarling Americana-inflected punk from Minneapolis, 1987, one of the most obscure tracks you’ll ever find. Kid’s on his way to school, worried about some physics test. And then a grisly sight suddenly puts everything in perspective. Followed by an offhandedly savage guitar solo by lead player Mike Crabtree. If you ever run across a copy of their lone release, the self-pressed Ciphers in the Snow album, grab it. The one song on it that’s made it to digital (sort of) is their tongue-in-cheek cover of ABBA's "S.O.S."

My apologies for the abundant vinyl noise.  Enjoy (or not).

hi man sry to bother, but can you reupload

Anyway you could re-up this one again?