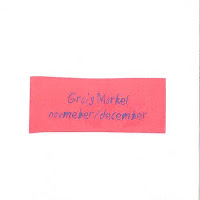 When Bob Mould disbanded Husker Du in 1988, he both branched out and mellowed out.  About ten years later, another power-trio that was far less renown, namely Seattle's pop-addled noise punks New Sweet Breath packed it in, and their frontman Graig Markel followed that act up with a solo career of his own. We all know that Mould's initial solo endeavors excavated some serious acoustic terrain - with astonishing effectiveness I might.

Under his own name, Markel would mine a similar vein (and hit pay dirt) but before delving into that arena he would shift gears significantly from NSB's tasty power chord melees to something decidedly more... soulful.  Not full blown urban-contemporary mind you, but unmistakably cosmopolitan soundscapes wherein he flirted with higher vocal registers and learned his way around a groove.  His second solo platter, 2000's Hard Grammar was really where he came into his own in this particular realm, however there was a little known preview to that album, this 1999 ep released exclusively via the original MP3.com website.  Filtered through a lo-fi delivery system, the five tracks populating November/December offered a transition of sorts to the more technically proficient full lengths that were just in the offing.  Hear for yourself and indulge in the warm bachelor-pad glow of this swank, yet refreshingly modest set.  Feeling out of the groove?  Graig Markel knows how to massage you right back into it.

While we're on the subject, check out my review of Graig's most recent album here.