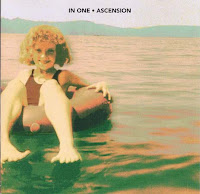 I  have two discs of compactness to offer you today, courtesy of In One, whose "Sour Yellow State" 45 I made available just a couple weeks ago.  In my writeup, I emphasized this upstate New York combo's qualifications to be judged by their shoegaze-mongering capabilities, but after spending some quality time with Ascension and Fade, I'm afraid I may have typecast them.  True, the tunes from that single (both appearing on Ascension btw) were the stuff of tremelo-kissed dreams, In One also fixed their gaze on the more austere side of the Britpop coin, specifically the likes of Adorable and Boo Radleys...though I might be the only one outside the band to hone in on those more obtuse angles.  "Used and Abused" is a particularly grand example of In One's acumen removed from the gauzy, dream-pop confines. 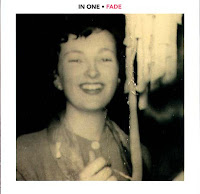 Fade, which followed two years after, Ascension boasted far briefer songs, but stylistically more of the same.  The arrangements were becoming slightly less congested however, with the trio seizing upon the crisp hue of contemporaries Riverside and The Ocean Blue at moments.  The liner notes mention Fade was designed as precursor to a forthcoming full length that I'm assuming never came to fruition.

Thanks!! Listening to them right now!

cool, thanks for these, I am gonna pick up used copies on amazon for sure. not expensive but hard to find

I fell in love with Mercury while working at the radio station in college, to the extent of memorizing most of the lyrics to that song.

Years later I'm singing it to my kids at a bedtime, but finding it nearly impossible to track down any evidence that a band called "In One" even existed to have sung it.

Thank you for this post which validates my sanity . . . or at least gives me company to share my delusion with.

Could you reupload these aswell?
Thanks!

Could you please reupload these?
Thanks!

The links are dead again ! Could you please reupload ? Thanks ahead , buddy . ps your blog is amazing !

pleaseeeee kindly re up the links..thank you very much in advance..

Hi Spavid. When I tried to open the Fade EP zip file, Microsoft Security Essentials blocked it claiming it has the Wacatac.B!ml trojan inside. I downloaded the zip file a second time and got the same response. Can you check on this? And be careful. Thank you and Happy New Year.

Never mind the above comment. I downloaded the file a third time after updating Microsoft Security Essentials and this time it was not blocked. Perhaps it was a false positive. Thank you for this amazing blog!