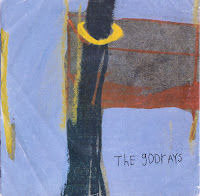 If you were hip to The Godrays, chances are you held some level of affection for their twee-pop antecedents Small Factory. In fact, the 'rays featured exactly two thirds of the Factory, specifically mouthpiece/guitarist Alex Kemp and drum-wrangler Phoebe Summersquash.  The apple doesn't fall from the tree, and in fact much of this wax could pass for Small Factory fare.  Nonetheless, this 45 rpm double shot bears the songwriting of a pensive mindset, with instrumentation coloring a more melancholic hue.  Not as lovingly gleeful as Small Factory, but the melodic tendencies thankfully carry over.  "Songs for TV Stars" and "Crummy" later turned up on an the band's sole album, while the other pair remained exclusive to this release.

I don't think Small Factory's "I Do Not Love You" is still in print. Can you share it with us?

Almost forgot about these guys! Liked their work, but loved some of those old Small Factory singles.

any chance to reupload this back?? thanks!