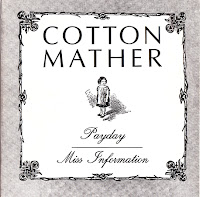 Hard to believe, but the Singles Going Single series has reached it's 200th installment.  The original plan for SOS was to share 45s from artists that I owned exactly one single from - that, and I was going to limit to one-hundred installments.  After hitting the "100" mark in 2009 with a Stray Tapes 7" I determined there was more than enough records in my collection to do another round of one-hundred.  Well. since I haven't come close to running out of wax, I'm still going to be sharing singles regularly, but most likely without the "Singles Going Single" prefix in the title.  To anyone I've confused over the years with the somewhat esoteric SOS concept, I apologize.

I thought I'd sunset said "prefix" with a bit of a bang, namely the first Cotton Mather single.  The record may not be of huge significance, even to the most dedicated fans, given that both "Payday" and "Miss Information" appeared on their debut album Cotton is King, in the same incarnations from what I'm able to derive.  Still, I can't think of a better introduction to CM's deft songcraft, which for a few exceptions was without peer in the mid '90s power pop strata.  Judging by how the band is gauged in hindsight, you'd think Cotton Mather only had one album to their credit, 1997's Kontiki (recently reissued in an expanded edition).  As wondrous an album as Kontiki was, Cotton is King was just as prodigiously inspired and advanced for a band of such a young stature, and in many ways more immediate.  Anyway, I'm not here to sell you Cotton Mather records.  Just listen and love.  Both tracks ripped straight from vinyl.

A. Payday
B. Miss Information

Truly a worthy offering. Both for the blog and for the band.

Gawd, do I ever love Kontiki! It's so good that it is now reissued, so more people can hear it.

And can we expect an expanded edition of Cotton Mather's third album, "The Big Picture"? We can only hope. Harrison has got to get "Heaven's Helping" on there. That this EP-only song was left off the album seems inexplicable to me.

There was also an album called The Crafty Flower Arranger released only in Austin that was mainly used to get gigs. Most of its best tunes reappeared on Cotton is King, though I'd argue in inferior versions.