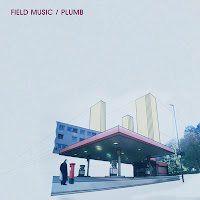 To those who espouse the notion that there's "nothing new under the sun" in the realm of music, read on.  Right off the bat I feel a tad hypocritical, if only for the fact that Field Music have been at it for the better part of ten years, and furthermore, Plumb is their fourth main course, following up a 2010 double album.  Not exactly a fresh face, but that aside, I can't think of anyone else making the scene these days that strike me as indigenous as this Sunderland, UK export, the nuclei of which entails brothers Peter and David Brewis.

With a myriad of art pop tangents tucked inside a loose post-rock construct, Field Music posses a rarefied tact throughout Plumb, that's surprisingly inviting not to mention challenging, even in the fleeting, two minute spurts they often elect to operate in.   A pocket-chamber accompaniment of cello and violin point to a classically trained ear (or two) in the band, if not belonging to the Brewis brothers, their stringed cohorts who color large swaths of the record with concise orchestral sweeps.  In addition to such aforementioned accouterments, Field Music put an emphasis on arrangements that few of their contemporaries have the desire and acumen to delve into.  Often harder to dissect than a Paul's Boutique rhyme, this combo dexterously weaves rich, serpentine frameworks that ironically are wholly approachable.   Moreover, Plumb is one of the most rhythmically palpable records I've encountered in a long time, with percussion exuding a prominently textured role.

To great extent, the proceedings here ebb and flow like a concept piece.  According to the official press release for Plumb, there are indeed some intrinsic thematic concerns threading these songs, but as for identifying them I'll leave that to your subjectivity.  Hopefully I haven't scared you off with the involved "mechanics" of the songs occupying the record I speak of.  In fact, Plumb isn't at all intimidating, and a good place to sample one of it's choicest nuggets, "(I Keep Thinking About) a New Thing" is on their Soundcloud page.  If you need further convincing, the band is offering a gratis download of "A New Town" on their homepage.  Plumb is available physically from Amazon and the usual array of MP3 merchants.
Posted by spavid at 7:55 PM