For Against - Shelf Life (1997, Independent Project) 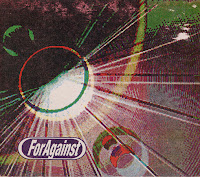 I had a request for this recently, and was happy to oblige, however much of For Against's catalog has been reissued in recent years, so should Shelf Life make it onto the market again I won't be sharing this for long.  Without a doubt the finest musical export to come from the state of Nebraska, For Against's sweetly chiming post-punk aplomb is just about the most sublime sound you could ever hope to treat your eardrums to.   The dream-pop tag that is so frequently affixed to them is a bit of a lazy inaccuracy, but there's a genuinely contemplative, and perhaps even bittersweet quotient to any given FA song, ranging from their chilly, noir debut, Echelons to 2009's demonstrably more lucid Never Been.  Shelf Life was the third of a trio of superlative albums the trio churned out during the '90s, preceded by the equally inviting Aperture and Mason's California Lunchroom.  And I've merely scratched the surface.  A good summation of For Against's discography is available from Trouser Press, and an even more thorough synopsis of the band itself can be had at the website of their current label Words on Music.  (BTW, track nine is an East River Pipe cover).

Amazing band and an amazing album. You've reminded me to pull my copy off the shelf and play this thing. It's been too long. Thank you!

I love these guys...this is my favorite album by them.

Many thanks! Have really enjoyed listening to FA again. Sort of related: was also listening to a disk by Riverside called "One" from the early 90s. Good stuff. I think if you like FA you'd like them. I guess they had a second disk in the early 00s which I was never able to find. Thanks again!

For Against have a genuine gift. Some of the finest music ever. Binman, I think the album you might be thinking is called Coalesced, which I think you can still get from Words on Music Records. There's a link in the write up.

Glad someone is dusting off some For Against. One of my favorite bands, criminally unknown by most.