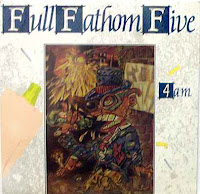 Going back close to four years, I shared two records by one of Iowa's most overlooked exports, Full Fathom Five.  The albums in question were Cry of a Falling Nation (1987) and Multinational Pop Conglomerate (1989).  There was actually another album sandwiched between them that I didn't have at the time, and now that it's in my clutches I have seen fit to do the obvious.  FFF took a page (or make that a chapter) from a certain contemporary power trio in Minneapolis that had just cashed in their collective pink slip upon arrival of 4 A.M.   And although the Five never quite harnessed the charisma of the Husker's, they carved an amped-out swath of their own.  There's plenty of buzzsaw riff-ola here, with almost nothing expendable.  So far as I know, FFF don't have any official web presence, but Trouser Press as usual provides a nice chunk of text distilling the virtues of their discography.

Hi Spavid, thanks a lot for sharing this album!!!

Can you update the link please :)

Greetings Spavid, is there any possibility for a re-up for this LP. My rekid player is broken at the moment and I need my "Paingiver" fix. Thanks in advance!

Any chance you could reup all the Full Fathom Five stuff? I really missed out first time around

Thanks. Much appreciate your link and comments A guy.