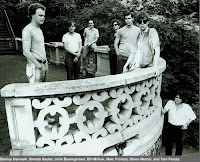 Word on the streets has it that Acute Records is in the process of assembling an anthology release of sorts from The Trypes under the tentative title, Music For Neighbors.  The Trypes were a mid '80s New Jersey start up that featured The Feelies Glenn Mercer and Bill Million, but weren't actually founded by that pair.  In fact, the Trypes primary period of activity was situated during the six year layover between the Feelies Crazy Rhythms and The Good Earth albums.  As fate would have it, Glenn and Bill would absorb two members of the Trypes, Brenda Sauter and Stan Demeski for the long belated second Feelies LP, The Good Earth.  The Trypes lineup, generally speaking, mutated into the group Speed the Plough by the late '80s, with a string of albums (including two recent ones) to show for themselves.  The Trypes have caught the reunion bug, performing in 2011, but in their initial lifespan they only issued one record, the four song Explorer's Hold ep in 1984, which can be read about here.

As for the nine hissy demos comprising this collection I'm offering, I am unaware if they will make any appearance at all on the forthcoming Trypes reissue (though the entirety of Explorer's Hold  will).  The Trypes aren't far removed from the Feelies, but with a decidedly more pronounced psychedelic inflection, and a tendency to noodle around with woodwinds and other sundry noises when it struck their fancy.  A cover of the Beatles "The Inner Light" provides a reasonable indication of where they were coming from.  These songs may only be available here temporarily, so don't sleep.  I'm missing song titles for three of them, btw.

Just FYI:
I didn't listen to these particular files, but judging from the song titles, they're from a Haledon compilation tape that seems to be in circulation. Eternal Ice and Return to Zion are Yung Wu songs. And the last 2 are by The Willies.

As far as I can tell, tracks 1-3 are on MUSIC FOR NEIGHBORS; the rest are not.

re-up when u have time please

I'm just discovering the era between Crazy Rhythms & The Good Earth and discovering how fertile it was. Thanks very much for this blog posting. Is there any chance the link could be refreshed??

Any chance for a re-up? Pretty please...?