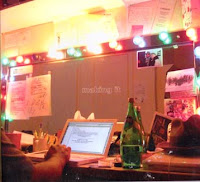 It's been ten years since we've seen an album bearing The Negro Problem moniker and for good reason I suppose, considering prime movers Stew (aka Mark Stewart) and seemingly permanent collaborator Heidi Rodewald wrapped themselves up in all things Broadway for a sizable chunk of the '00s, by virtue of Stew's semi-autobiographical Passing Strange rock musical (which btw earned a Tony).  Much like that less than ballyhooed stage production, TNP/Stew have yet to approach anything resembling a household name, and quite frankly that's to the loss of an unarguably fickle music industry and it's wilfully slavish patrons.  I guess that means more for us, and Making It is a welcome return.  It's a record that sounds as if it was constructed in a new era, because quite frankly it's the product of a new era.

TNP's initial salvos, namely 1997's Post Minstrel Syndrome and Joys & Concerns, which followed two years later, were wondrous troves of pocket symphony and slyly baroque power pop.  While those are still the records to start with for folks not acquainted with Stew's universe, Making It is many times over sonically advanced.  Boasting a lucid, I-can-hear-a-pin-drop fidelity and bright, streamlined execution, this is a record that sounds like the logical halfway point between TNP's nascent ethos and Stew's increasingly refined solo ventures.

There are few concurrent threads needling their way through Making It, rather we're treated to a pastiche of styles and themes, starting with the cacophonous instrumental opener bearing the same title as the album.  This eventually leads into carefully measured, ballad-esque pieces like "Curse" and "Leave Believe" the latter of this pair bearing a particularly confessional tone with a recently split up Stew and Heidi trading verses.  If it's Stew's colorful couplets and witty wordplay that you've come to know and revere, "Black Men Ski" fits the bill to a fault, while the methamphetamine concerned "Speed" escalates to a robust quasi-anthem by song's end, incorporating shades of his late '90s orchestral leanings that endeared me over a decade ago.  And on the lusciously tuneful "Therapy Only Works When You Tell the Truth," our man is posed the question as to when he first noticed his relationship was on the rocks.  In typical fashion, Stew responds "When she left."  Making It is available from Amazon and the usual digital retailers.
Posted by spavid at 2:13 PM

Never heard em' before but the sample is pretty good. You go Stew! Thanks for the introduction.

Also I've been looking for...