Otis and the Elevators - Cross the Bridge (1989, Smoking Munchkin) 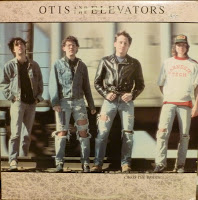 I'm pretty certain I received an email request for this disk after I posted Otis and the Elevators first album, Some Career last summer.  If I didn't seem overly enthusiastic about that record, you can just about triple my reticence for Cross the Bridge, an album which kicks things off spaghetti western style with a brisk hoedown of sorts "The President Stumbled."  For better or worse, Otis and the Elevators' Americana bent ebbs and flows for the remainder of side one.  The flipside offers the reggae-lite morsel "Dominate," reprised from the first album in almost identical form and intonation.  "Hole in the Jungle" is CSN&Y by way of Dream Syndicate, and "One Woman One Man" throbs with a certain fervor that ideally would have cropped up elsewhere, but Cross the Bridge is far from a total loss.