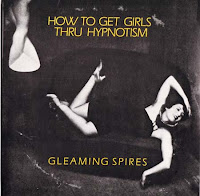 Meeting somewhere at the nexus of Todd Rundgren and The Tubes, Los Angeles' Gleaming Spires featured two guys who were moonlight from their gig as the rhythm section of the much more celebrated Sparks.  And speaking of all things celebratory, their 1983 platter, Walk on Well Lighted Streets, possessed a jubilant air to it that shook my usually austere foundations (case in point, the rousing "A Christian Girl's Problems.").  I thought I'd do a little backtracking with this 1982 single when I happened upon it for a song on Ebay last year.  "How to Get Girls..." (which also appeared on their '80 debut LP, Songs of the Spires) is vaguely tongue-in-cheek synth pop with a strong singer/songwriter bent, and a vocal performance by Leslie Bohem that approaches Freddie Mercury at points.  "Walk Right," an exclusive b-side offering an equally acerbic, but an even more sophisticated arrangement, that probably would have been better without the offbeat little juxtaposition towards the end.

A. How To Get Girls Thru Hypnotism
B. Walk Right

Their classic "Are You Ready For The Sex Girls" is one of those songs that pops into my brain every once in a while...