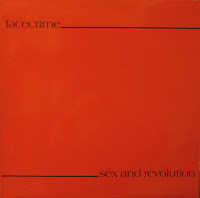 Now this is something special.  It's common knowledge to The Pursuit of Happiness die hards that they weren't the first band Moe Burg fronted.  There were the Modern Minds who released a 1980 single (eventually reissued and bonus-ized considerably, which you can check out here) and a little later came Facecrime.  I bought their one and only ep on Ebay recently, however there was a slight snag.  The record was supposed to come with an insert, alas mine did not, which means I'm severely limited on band details.  As was the case with the Modern Minds, Moe and his Facecrime cohorts were indigenous to Edmonton, Alberta.  Geographic locales aside, the beauty of this record was that it was only three years apart from the first TPOH ep, 1987's I'm an Adult Now.  Sex and Revolution was very much in the pop realm, and Facecrime were thoroughly logical precursors to TPOH, cementing the Rundgren-esque building blocks carefully into place, piece by piece.  "Cable TV," "She Will," and "Mystery to Me" are about as tell-tale as one could hopefully expect - the harmonies, alone are a dead giveaway as to what Moe Burg had in store for the masses a little bit in the offing.  I've augmented this mini treasure trove with two Facecrime songs that appeared on a 1983 Edmonton compilation, It Came From Innerspace, which can be had in it's entirety from Punkanada blog.

plus: "Did I Hear You Right" & "I Know Some People" from It Came From Innerspace compilation.

Great Stuff.. didn't know about this

I'm so glad I've bookmarked your blog. Full of gems like this! Thank you!

I just received a digital turntable recorder system thing for my birthday, and my immediate plan was 'now I can record the facecrime (lower case f) ep for Wilfully Obscure.' And then I visited today to find this link- so, you beat me to it...well done. I can likely send you a scan of the insert if you like. Cheers.

Facecrime was Moe on guitar, Dave Gilby on drums and the late Blaine Vanstone on bass. Video of this lineup can be found here: http://www.youtube.com/watch?v=lbuuyenBW9Y

As well, have a look at the run out matrix on both sides of that record for the hidden messages..

Any Moe Berg is good Moe Berg. It will always be one of the biggest regrets of my music fan life that I never got to see them live.

Link dead, would love a re-upload of this one.

Could you please re-up this one? I would love to hear it but it isn't available anywhere. I met Moe just recently. Cool guy. Many thanks!

I would also like a repost of this please. Many thanks