Six of One Half Summers - This Years Version of These Chords (1999, Liberty Park) 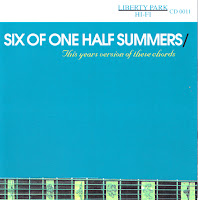 This one has been kicking around in my collection long before I started Wilfully Obscure.  I remember appreciating This Years Version... at the time I obtained it, but was never quite over the moon about it.  My stance on this disk is essentially unchanged today.  A roughewn punk pop quartet who peppered their music with tinges of emo, Six of One Half Summers had gobs of potential, though they demonstrated it inconsistently.  "Tell Me What to Call This," "Look at That Left Coast," and "Five Hundred Dollars" exude the tuneful prowess of Superchunk and the strenuous thrust of Texas is the Reason.  Elsewhere, This Years Version... is occasionally appealing (if not tolerable), but had Six of One Half Summers stuck it out and honed their craft for a few more years, a quantum leap may have been in the cards.

hey, excellent band - sadly the link is dead, is a reupload possible? thanks in advance...