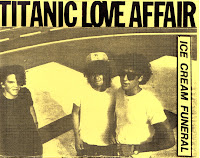 Now this is something special (sound familiar)?  In all sincerity this seven song demo from one of my favorite Midwest aggregation, Titanic Love Affair was a very sweet find, considering it predates their first album by a good three years AND offers six songs that never appeared on official releases. We're talking half an albums worth of TLA goodness that few fans knew existed, let alone heard, yours truly included.   The obliquely titled tape, Ice Cream Funeral, offers but one preview of their 1991 debut, "Only in the Past," and while it would have been great to experience early incarnations of say, "Planet Strange" or "Happy," I'm hardly complaining - especially considering that every tune on here is a keeper.
Exceptional audio quality for a nearly 25 year old artifact I might add.

For many people, TLA are recognized not so much for their records, but for the fact that their lineup included the late Jay Bennett, who would eventually be a driving force in Wilco.  At the time of this recording, TLA were merely a trio - Jay on guitar and vocals, Ken Hartz on bass and mic, and drummer Mike Hazelrigg, who parted ways by the time the group signed to Charisma Records.  As you might expect, the material on Ice Cream Funeral is of a rawer persuasion than what their proper records would offer, but not by much.  And of those "proper" records, I'm hosting two of them - the No Charisma ep that surfaced in 1992, and their 1996 parting shot Their Titanic Majesties Request.  In closing I should mention that shortly before Bennett's passing it was rumored that an archival compilation of unreleased Titanic Love Affair recordings was being assembled, but my understanding is that those plans were shelved.

Thanks for posting this. I'm a big fan! Never knew this even existed.

This is great! Mats-type guitar rock with soulful vocals.

This is great! Mats-type guitar rock with soulful vocals.

Wow. Both my cassette and TLA t-shirt (purchased from Record Swap on Green St.) have long vanished.

Thanks sincerely for posting this. I miss Jay.

Im so glad i found this! I was actually running the TLA myspace site for Jay and helping him get the TLA comp together for release. I would be the one writing the liner notes for the cd that never was. He had told me about this tape because he had the masters, but I never got them. I did however manage to get the 4th TLA record from him that never came out as well as assorted rare tracks from past records. So sad about his passing....Jay was one in a million.

This is awesome. Thanks for posting it. TLA was a big influence on Truck Stop Love and Ultimate Fakebook, two bands I used to play with. This blog is amazing--I'd love to send you some stuff by The Dead Girls if you're interested...

The zipshare file is no longer working. Someone please send another !