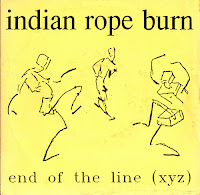 Shame for me for being so completely oblivious to Kent, OH's Indian Rope Burn when they were still roaming the land some twenty years ago.  This three-songer is my first, and thus far only encounter with IRB, who were a trio at the time of this release.  Slightly askew, but driving pop/rock, informed by gobs of college radio dispatches circa the late '80s.  The vocals are largely monotone, but then again so were Nico's and we loved her, right?  In addition to this wax there were three IRB cds, and from what little I was able to glean online, they took more of an industrial tack later in the career, but I can't say those inclinations crop up here.  Enjoy (or not).

huh -- I guess you never know what's going to pop up in your Google reader.

The first CD we did (which came out about a year before this) was more in the post-punk vein. We became a four-piece after this 7" and did transition to an industrial outfit on the next two CD's ("Sex Party" 1993 & "The Big-Bang Payoff" 1995).

Vocalist (and bassist on this 7") Clay Vause died in 1998 from cancer.

As far as I know, the first CD hasn't been salvaged from the cutout bins of the midwest and uploaded anywhere (yet). Which is probably a good thing.

Hey Mike. Thanks for commenting, and sorry to hear about Clay. Had no idea. I actually wouldn't mind hearing that first Indian Rope Burn CD. There are a few copies floating around on Amazon, but if you have any unsold copies to spare feel free to email me at the address in my profile. Thanks again.

I forgot to say thanks so much for posting this, as I haven't heard these tracks in about 20 years.

As far as uploading a copy -- as they say in Spinal Tap, it's "a mystery best left unsolved." ;)

Well, I guess them's the breaks. That's for getting in touch Mike. We appreciate it!

Hey, Mike! Not sure if you'll see this. I was Krista Grinder's best bud in school. Genenia (God love her!) dutifully took us to several of your live shows back in the day. I LOVED the hell out of your music! If you have any CDs or shirts at ALL, I'd love to get a copy of anything - and that's not for resale. I was very bummed to hear about Clay, btw. I was a kid, when I sorta knew him, but he was super nice to me. I thought he was the walking definition of cool. If Mike or anyone with any of the CDs on hand sees this, please reach me at kevans36@gmail.com. Thanks!!
- Kristi

please reup. Many Thanks !